How do Americans spend their days? 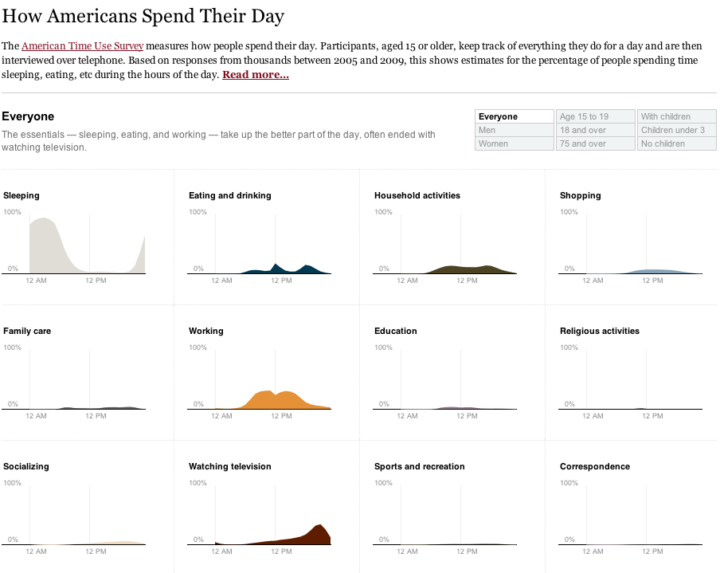 One of my favorite data graphics is an interactive piece by The New York Times that shows how Americans spend their day, based on the American Time Use Survey (ATUS). I’ve also been wanting to play with Mike Bostock’s Data-Driven Documents, or D3 for short, for a while now. So put the two together, and this is what I got.

Main takeaway: we spend most of our time sleeping, eating, working, and watching television.

I followed the NYT aesthetic mostly for myself. I’ve found that a good way to learn is to try to copy something you like, and then use what you learn to do your own thing.

The NYT version was a stacked area chart with a number of interactions that made the data easier to read. I took a different route and split up some of the main activities, such as sleeping, eating, and working, into separate time series charts to see if it allowed you to see anything new. Showing separate charts at once places more focus on comparisons than on the distributions.

There was one challenge with the data that I didn’t anticipate. ATUS provides a table of percentages by hour, but you’ll notice with the NYT graphic the numbers are per ten minutes. You can actually calculate this with the ATUS microdata, which is basically the raw survey data from a few thousand respondents. I did this at first but lost patience, because I really just wanted to play with D3 rather than spend all my time building estimates.

I went with the hourly data which are averages for the sample population. The demographic breakdowns were only available in PDF, so I had some data entry fun, too. Luckily, I got my hands on Able2Extract (going off of Matthew Ericson’s advice) to ease some of the pain.

Once the graphic was done, I noticed that the transitions are actually a nice way to show differences. For example, if you look at the time use for men and then women, the differences are subtle, but because the change is animated it’s easier to spot. I think I knew this already, but probably never thought about it very deeply.

Anyways, it was fun playing around with D3. The beginning learning curve was kind of steep for me, but now that I know my way around a little better, I’m expecting more fun to come.

Mess around with the final graphic here. Let me know what you think.

[How Americans Spend Their Day]