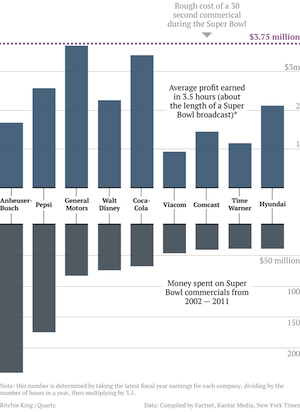 Ritchie King for Quartz compared money spent on Super Bowl ads — now about $3.75 million for a 30-second spot — to how much the companies make on average in 3 and a half hours (the average length of a game).

It’s impossible to say exactly how much a successful Super Bowl ad ultimately earns a company. Surely the Wassup commercials were a huge boon for the Budweiser brand—but how huge?

One thing is clear though: for the biggest advertisers, that $3.75 million is truly a pittance. In fact, some of them make almost as much in profits in an average 3.5 hours—roughly the time it takes to air the Super Bowl itself.

Note that spending (on the bottom) is total between 2002 and 2011, and the vertical scales are different (so it probably would’ve been good to give more visual separation between the two charts), but still, kind of an interesting perspective.