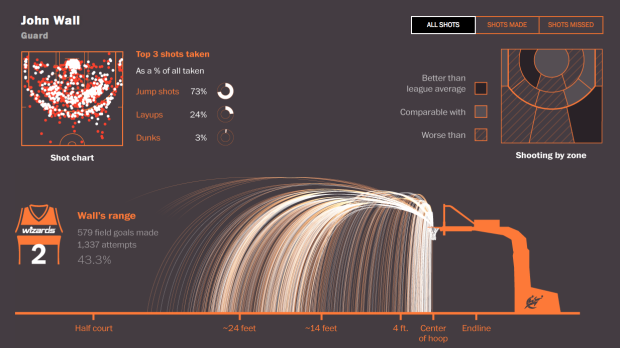 Scoring points ultimately boils down to taking and making shots. The Wizards were efficient shooters around the basket and from behind the three-point arc last season. But they were inefficient at long two-point shots, leading the NBA in mid-range attempts but making them at a below-average pace.

As seen above, the Post took a slightly different approach than the x-y overhead view you might be used to seeing. The overhead views are still there in the top corners, but the focus is on shot distance. Colored arcs show makes and misses for the year from a given distance. More orange means more misses in an area, and more white means more makes.

The thumbnails for each player are the best part.

They pretty much tell you all you want to know about each player, as far as shot distance is concerned.