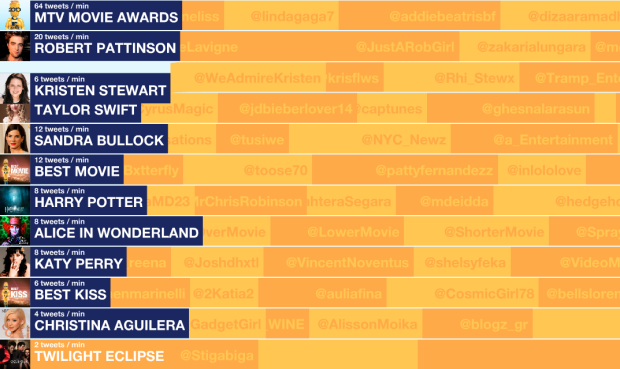 Excited about the 2010 MTV Movie Awards? Yeah, me neither. But if you want to keep an eye on things while you watch or do something else (you know, in case there’s a Kanye moment), MTV and Stamen provide a tweet tracker for the event. Similar to the VMA tracker last year, movies and celebrities are highlighted based on tweets about them per minute. The look, feel, and views are different, however.

There are two views. There’s a bar graph (above) with a nice animated wave-like flare to it. The other is a cloud of floating mosaics. Bigger mosaics indicate more tweets per minute for the topic. 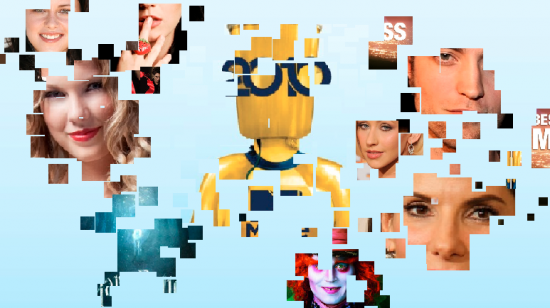 All in all, there’s a really nice flow to all the views. Great work as usual by the Stamen guys. Check it out for yourself. The animation is what makes it.

As an aside… I wonder who will win for best kiss this year. Robert and Kristen won it last year, and they’re up for it again this year. Personally, I think Zach and Vanessa were robbed in 2009. That was, like, so wrong. Their chemistry is way better. Robert and Kristen also have excellent chemistry, so I guess it was alright. This year, Kristen was also nominated for her kiss with Dakota Fanning. Interesting. Ryan Reynolds and Sandra Bullock could win it too though for their magical kiss in The Proposal. I mean seriously, it is like, totally Sandra’s year. For sure. Sandra. But then there was that amazing kiss between the Taylors. I don’t know. Tough call. Sandra though all the way. Go team Sandra. Or Kristen and Robert.