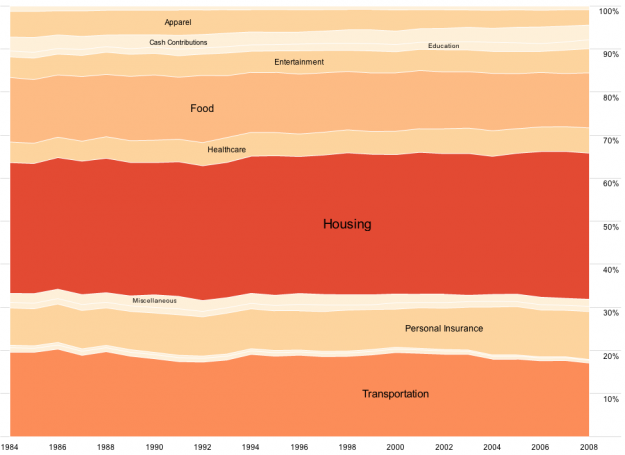 You’ve seen the NameExplorer from the Baby Name Wizard by Martin Wattenberg. It’s an interactive area chart that lets you explore the popularity of names over time. Search by clicking on names or typing in a name in the prompt. It’s simple. It’s sexy. Everybody loves it.

This is a step-by-step guide on how to make a similar visualization in Actionscript/Flash with your own data and how to customize the design for whatever you need. We’re after last week’s graphic on consumer spending (above).

This tutorial is for people with at least a little bit of programming experience. I’ll try to make it as straightforward as possible, but the concepts might be a little hard to grasp if you’ve never written a line of code. Just a heads up. Of course it never hurts to try.

If you don’t care about customization or integration into an application and don’t mind putting your data in the public domain, you could also just dump your data into Many Eyes, and use the Stack Graph.

Like I said, this is all in Actionscript, so before we start anything, I strongly recommend you get Adobe Flex Builder if you don’t already have it. You can buy it, get a trial version from the Adobe site, or if you’re in education, you can get it for free.

There are ways to compile Actionscript without Flex Builder, but they are more complicated.

Luckily you don’t have to start from scratch. In fact, most of the work has already been done for you using Jeffrey Heer’s Flare visualization toolkit. It’s an Actionscript library. We’re going to work off one of the sample applications: JobVoyager. Once you get your development environment setup, it’s just a matter of switching in your data, and then customizing the look and feel.

Download the most recent version of Flare, and then unpack the contents into your working directory.

Open Flex Builder. You should see something like this: 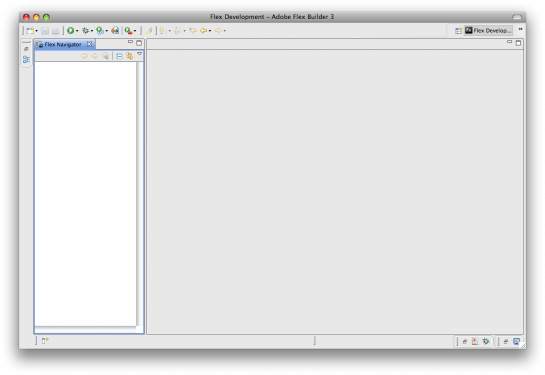 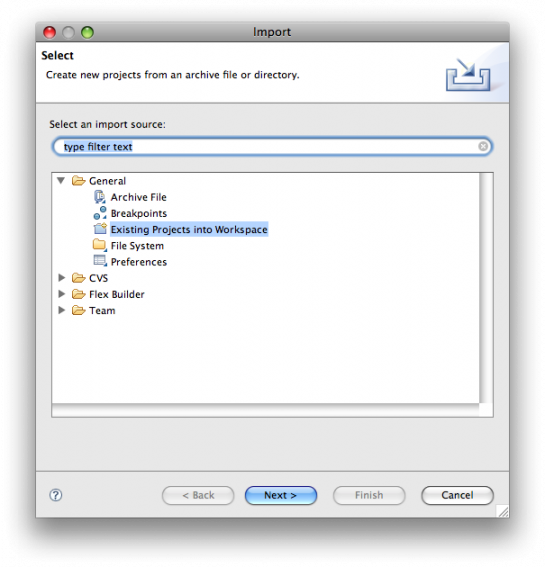 Select “Existing Projects into Workspace” and click “Next.” Browse to where you put the Flare files. Select the “flare” directory, and then make sure “flare” is checked in the project window. 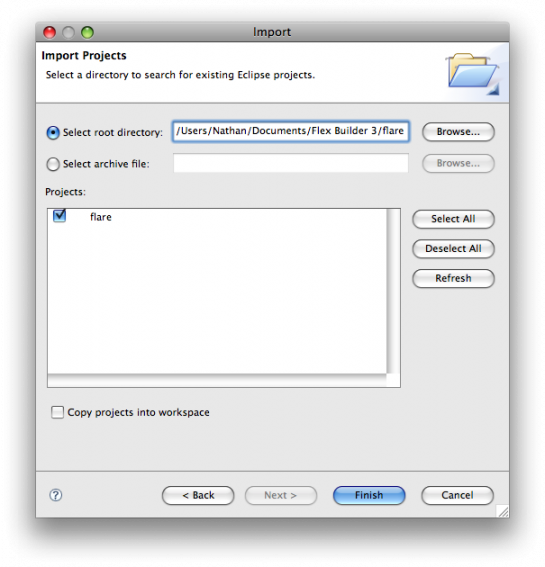 Do the same thing with the “flare.apps” folder. Your Flex Builder window should look like this once you’ve expanded the flare.apps/flare/apps/ and click on JobVoyager.as. 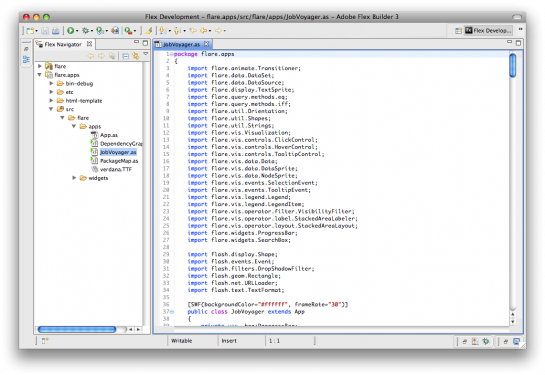 If you clicked the run button right now (the green button with the white play triangle top left), you should see the working JobVoyager. Get that working, and you’re done with the hardest part.

Let’s dive into the code now so you can adapt the visualization to your own data and customize the aesthetics. Again, we’re going to adapt this code to consumer spending data to make last week’s graphic. 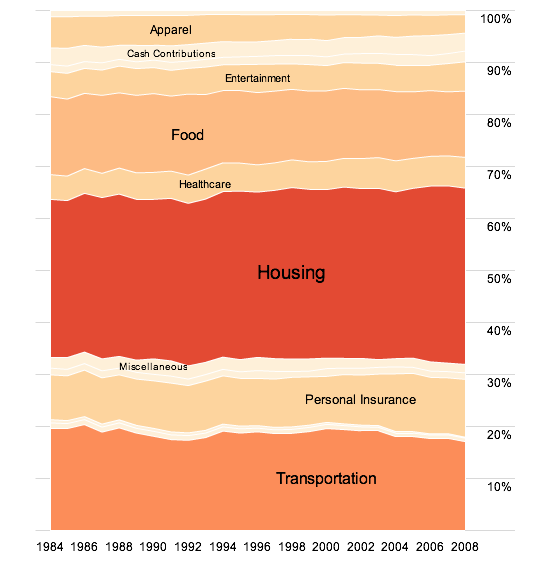 First we need to change the data source. This is specified on line 57.

Change the _url to point at the spending data, which like jobs.txt, is also a tab-delimited file. The first column is year, the second category, and the last column is expenditure:

Now the file will read in our spending data instead of for jobs. Easy stuff so far.

The next two lines, line 58 and 59 are the column names, or in this case, the distinct years that job data was available. It’s by decade from 1850 to 2000. We could make things more robust by finding the years in the loaded data, but since the data isn’t changing we can same some time and explicitly specify the years.

Next we need to change references to the data headers. The original data file (jobs.txt) has four columns: year, occupation, people and sex. Our spending data only has three columns: year, category, and expenditure. We have to adapt the code to this new data structure.

Luckily, it’s pretty easy. The year column is the same, so we just need to change any people references to expenditure (vertical axis) and any occupation references to category (the layers). Finally, we’ll remove all uses of gender.

At line 74 the data is reshaped and prepared for the stacked area chart. It specifies by occupation and sex as the categories (i.e. layers), uses year on the x-axis, and people on the y-axis.

Change it to this:

We only have one category (sans sex), and that’s uh, category. The x-axis is still year, and the y-axis is expenditure.

Line 84 sorts the data by occupation (alphabetically) and then sex (numerically). We’ll just sort by category:

Are you starting to get the idea here?

Line 92 colors layers by sex, but we don’t have that split in our data, so we don’t need to do that. Remove the entire row:

We’ll come back to customizing the colors of the stacks a little later.

We want to label based on spending category, so we’ll change the line accordingly:

Lines 213-231 handle filtering in JobVoyager. First there’s the male/female filter and then there’s the filter by occupation. We don’t need the former, so we can get rid of lines 215-218 and then make line 219 a plain if statement.

Similarly, lines 264-293 at buttons to trigger the male/female filter. We can get rid of that too.

We’re getting really close to fully customizing the voyager to our spending data. Go back to the filter() function at line 213. Again, we need to update the function so that we can filter by spending category instead of occupation.

If you ran the code right now, everything should compile correctly, and it’ll look something like this: 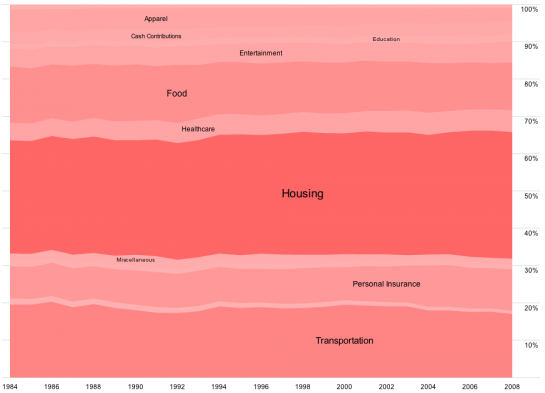 Then line 105 updates saturation (the level of red), by count. The code for the SaturationEncoder() is in lines 360-383. We’re not going to use saturation though. Instead, we’ll explicitly specify the color scheme.

We’re going to make stroke color white with lineColor. If there were more spending categories, we probably wouldn’t do this because it’d be cluttered. We don’t have that many though, so it’ll make reading a little easier.

Next, make an array of the colors we want to use ordered by levels. Put it towards the top around line 50:

I used the ColorBrewer for these colors.

Then we’ll add a new ColorEncoder around line 110:

Tada, you now have something that looks like what we’re after: 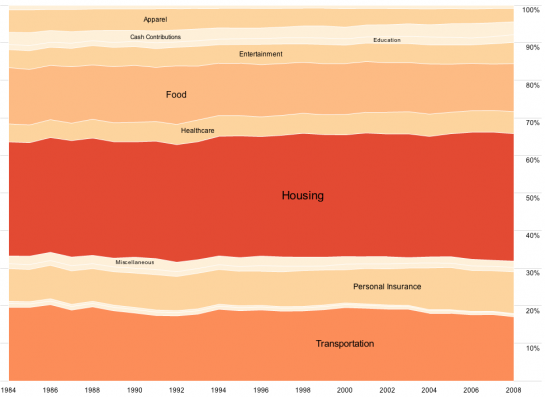 To play with this yourself, just complete step 0 and then replace JobVoyager.as with this file. It has all the updates we’ve just covered.

Step 11. Where to Go From Here

There’s a lot of things you can do with this. You can apply this to your own data, use a different color scheme, and further customize to fit your needs. Maybe change the font or the tooltip format. Then you can get fancier and integrate it with other tools or add more Actionscript, so on and so forth. If anything, you should at least check out what else you can do with Jeffrey’s Flare visualization toolkit.

For more examples, guidance, and all-around data goodness like this, pre-order Visualize This, the upcoming FlowingData book.