Paycheck Gap Between Men and Women – Guess Who Makes Less 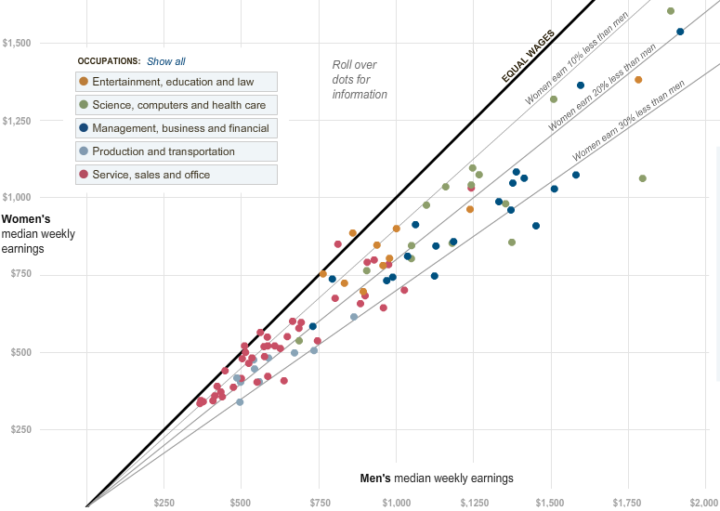 Hannah Fairfield and Graham Roberts from The New York Times show the disparity in salary among men and women. Each dot represents a job and the dark black diagonal line is equal wages. Jobs that appear below the line, are those where women, on average, make less than men in a comparable profession. There are six jobs above or on that line by my count. It looks like the higher the wage, the greater the disparity, but like most things the explanation is a little more complex than discrimination.

Nearly every occupation has the gap â€” the seemingly unbridgeable chasm between the size of the paycheck brought home by a woman and the larger one earned by a man doing the same job. Economists cite a few reasons: discrimination as well as personal choices within occupations are two major factors, and part of the gap can be attributed to men having more years of experience and logging more hours.

Take note that this graphic could have easily been just a scatter plot; instead the Times annotates and tells readers what they are looking at. There’s a story to be told. I also really like the notes on outliers as you select the different occupation groups. What do you think?