When wife earns more than husband, they report a lesser gap 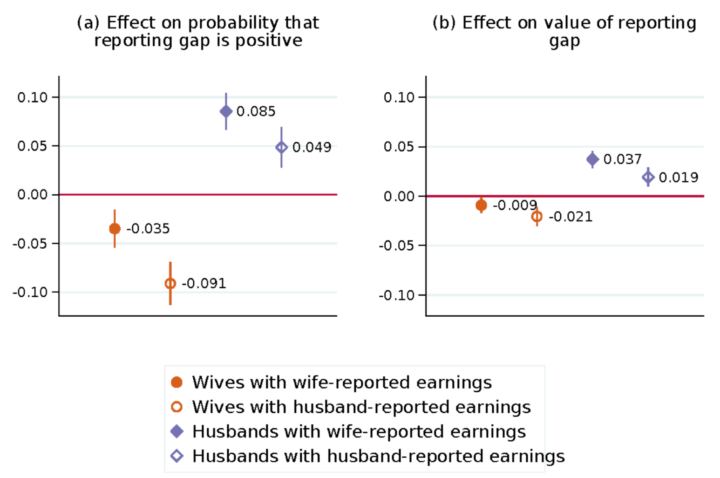 Marta Murray-Close and Misty L. Heggeness for the Census Bureau compared income responses from the Current Population Survey against income tax reports. The former can be fudged, whereas the latter is accurate by law. The researchers found a statistical difference that suggests when a wife makes more than a husband, they report a lesser gap in the survey.

This paper compares the earnings reported for husbands and wives in the Current Population Survey with their “true” earnings from administrative income-tax records. Estimates from OLS regressions show that survey respondents react to violations of the norm that husbands earn more than their wives by inflating their reports of husbands’ earnings and deflating their reports of wives’ earnings. On average, the gap between a husband’s survey and administrative earnings is 2.9 percentage points higher if his wife earns more than he does, and the gap between a wife’s survey and administrative earnings in 1.5 percentage points lower if she earns more than her husband does. These findings suggest that gendered social norms can influence survey reports of seemingly objective outcomes and that their impact may be heterogeneous not just between genders but also within gender.