The 2020 Census approaches, and with budget cuts, resignations, and so much stuff up in the air, there’s cause for concern. How will the accuracy of the count compare to others? The distribution of billions of dollars rides on the estimates. The closer the counts are to reality, the more fairly money distributes to communities.

Imagine we have some amount of money. It’s straightforward to split that money between two people. 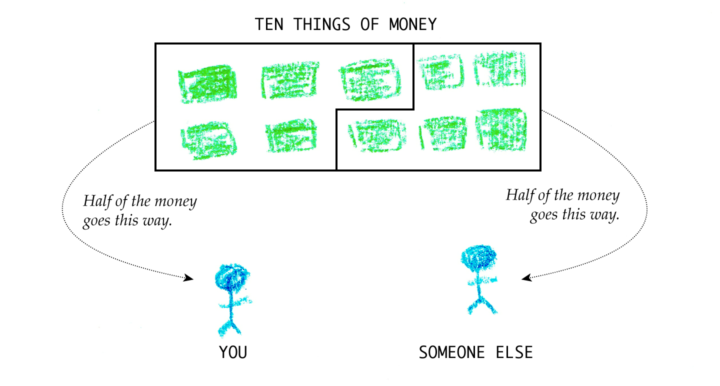 With everyone accounted for, it’s also straightforward to split the money among several people.

The challenge arrives, like with most data, when the uncertainty and fuzziness join the party. We might not know the exact number of people in each group. Maybe someone isn’t present for the group counting meeting. Maybe others don’t want to be part of the count because they don’t trust the process. Maybe there wasn’t enough time to count everyone. There are many reasons why someone isn’t explicitly counted.

We could just exclude the missing people from the count. You snooze you lose. Or, in this case, the group with the lower count receives less money units. But that sucks for the people in that group, because they still have to distribute the money they receive among the in-real-life number of people.

So we estimate the number of people in each group. In each state. In each county. City. Neighborhood.

This brings us back to the 2020 Census. There are many groups and many people. There are many dollars (and other resources) to distribute. The country, states, cities, towns, and communities form policies and make decisions based on estimates. It’s not a direct formula between population and money, but they are tightly related. Accurate estimates make for better-informed decisions.

This is a big deal for smaller groups, where a shift in an estimate can be significant percentage-wise.

So as 2020 approaches, let’s aim for higher accuracy and less uncertainty.