Demographics of laughter on the web 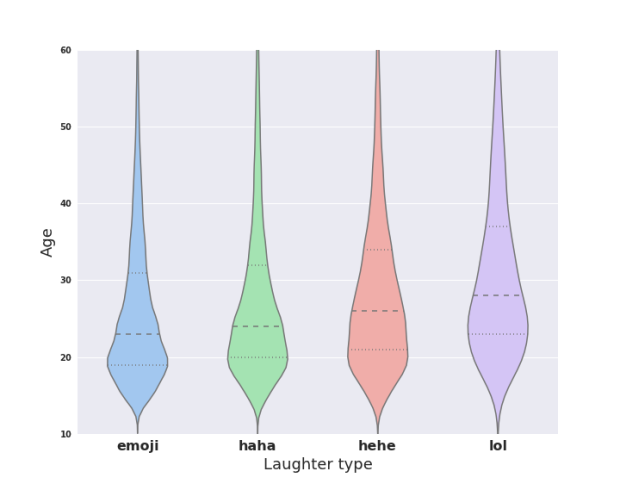 There are a handful of ways to express laughter online, and it appears there are subtle differences in demographics, based on what you use. After reading an anecdotal story in the New Yorker by Sarah Larson, Facebook Research looked at the data.

Ms. Larson discusses the emergence of the peculiar hehe, which is "poised upon us by the youth." Are the hehes really a more youthful expression than hahas? The data say: not so! We found that across all age groups, from 13 to 70, the most common laughs are still haha, hahaha, hahahaha, and only then followed by hehe. If hehe is not particularly favored younger people, are there other distinctive ways youth express themselves? To answer this we collected all emoji, hahas, hehes and even the lols, and looked at the distribution of ages.

While used across all ages, Emoji and haha tended towards the younger Facebook population, whereas hehe and lol tend towards the older. And by “older”, I mean medians in the early 20s versus late 20s. Ha.