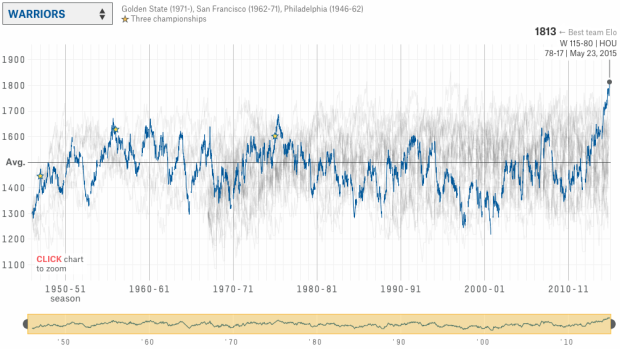 Which NBA basketball team is the greatest ever? Instead of a circular debate at the bar, Reuben Fischer-Baum and Nate Silver at FiveThirtyEight used the Elo rating system to rank teams over time.

Elo ratings have a simple formula; the only inputs are the final score of each game, and where and when it was played. Teams always gain Elo points for winning. But they get more credit for upset victories and for winning by larger margins. Elo ratings are zero-sum, however. When the Houston Rockets gained 49 Elo points by winning the final three games of their Western Conference semifinal during this year’s playoffs, that meant the Los Angeles Clippers lost 49 Elo points.

This puts this season’s Warriors as the fourth best of all time.