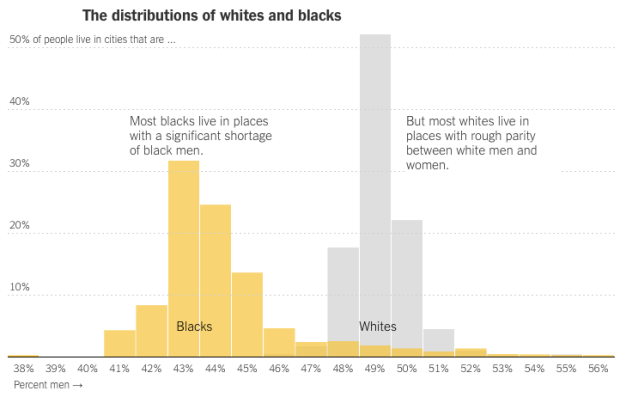 Justin Wolfers, David Leonhardt, and Kevin Quealy for the Upshot explore the gender gap between the black male and female populations in the United States. It’s wide.

They are missing, largely because of early deaths or because they are behind bars. Remarkably, black women who are 25 to 54 and not in jail outnumber black men in that category by 1.5 million, according to an Upshot analysis. For every 100 black women in this age group living outside of jail, there are only 83 black men. Among whites, the equivalent number is 99, nearly parity.

The 1.5 million number is interesting in itself (although a margin of error mention would’ve been nice), but the possible reasons and social implications behind it are what make the piece worth the read. We’re getting into the human part of demographics.