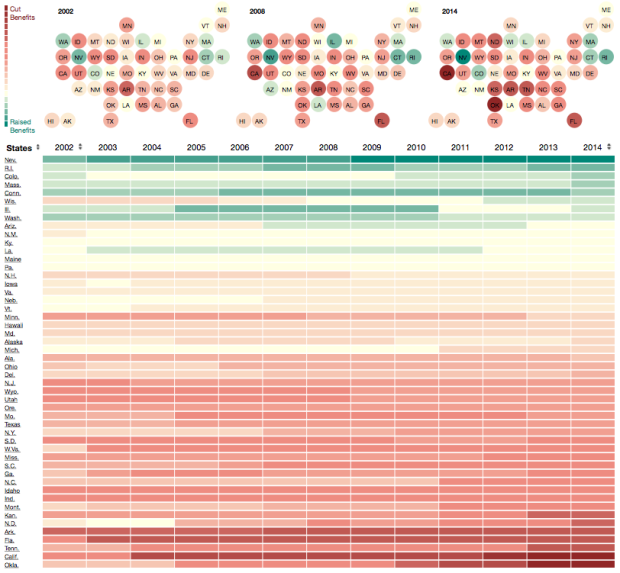 Workers’ Compensation, a promise to pay medical bills and some of your wages if you’re injured on the job, has been been on the decline over the past decade. ProPublica shows the changes from several angles — state reforms, cost to the employer, and employee compensation — with three interactive graphics.

The first, shown above, summarizes state reforms over the past decade. It’s a heat map accompanied by small grid maps. Green means raised benefits, red means cut benefits, and yellow means stayed the same. Determining rise, decline, and static is a little fuzzy from the description, but it’s based on a combination of actuarial rankings, a report from the U.S. Department of Labor, and other sources.

Each row represents a state and each column a year. Click on any state to see the reforms over the years. If I could make a quick adjustment, I’d provide an indicator for each reform in the details so that you’d know at a glance if there was an improvement or a cut. I expected the red-yellow-green color scheme to carry over to the details.

The other two views are more straightforward data-wise.

There appears to be an overall decrease in average insurance cost to employers. Use the dropdown menu to see what’s going on in your state. 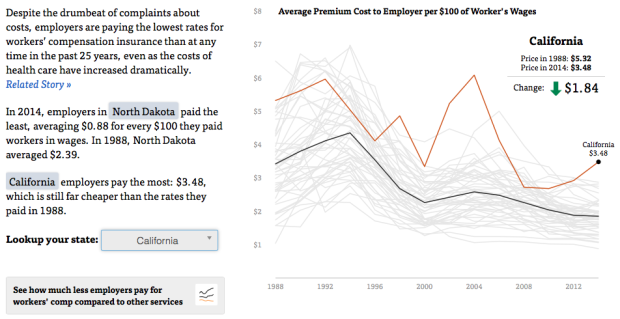 Quick adjustment suggestion: Keep a state time series highlighted when selected via the dropdown or clicked on the chart itself.

Finally, a set of body-shaped glyphs represent average maximum compensation per body part. The higher the compensation the larger the part. 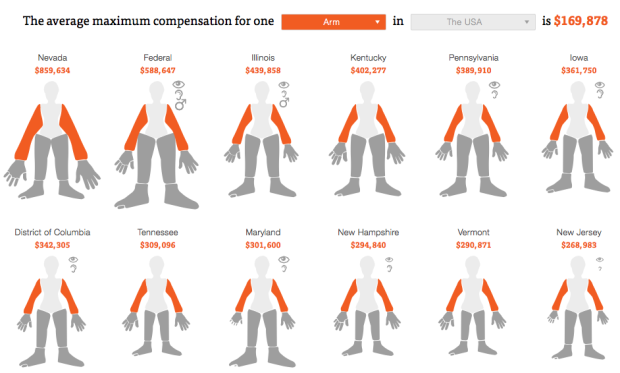 Nevada seems to be the standout across all three angles. The cost to employers is relatively low, the average maximum compensation for employees is relatively high, and benefits have improved over the years. How’d they manage all three of those, and how do other states get in on this?

Anyways, plenty to look at here for your state and how it compares to others. I’m pretty sure there was a lot of manual research involved, especially for the first reform graphic, so that you wouldn’t have to. Might as well take advantage.

Explore on your own: