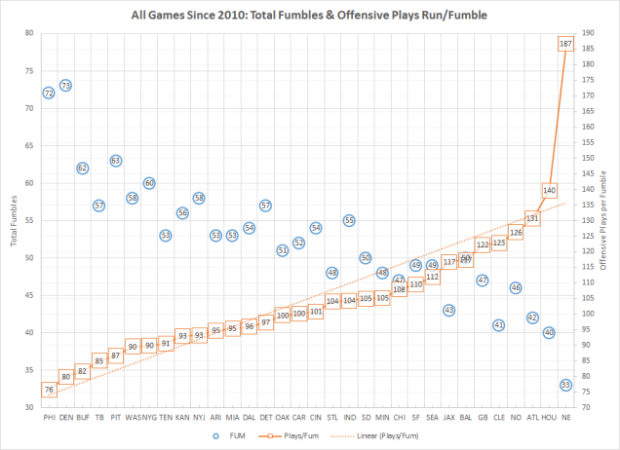 A data-centric look at New England Patriots fumble rates at home made the rounds this week. The most cited tidbit was that there is only a 1 in 16,233 chance that the Patriots achieved the lower rate via randomness. Therefore, the Patriots must have cheated. Gregory J. Matthews and Michael Lopez explain, finding by finding, why the results from Sharp Football Analysis are suspect.

Even if you’re not into football, read it for the statistics lesson.

The Patriots are indeed nearly off the chart, but that is partially because the author uses the smallest y-axis possible to demonstrate the largest effect that he could. It’s generally preferred to use a y-axis that begins at 0, as any other scale is misleading and, in all likelihood, sensationalistic. (There are a few exceptions to this, but rarely so straightforward as this.)

To put it another way, imagine four men standing side-by-side, and three of them range from 6-foot-1 to 6-foot-4; the fourth is 6-foot-6. The tallest man is tall no matter how you frame the men, but if you turn all four into lines on a chart, and start the chart at the shortest man’s eyebrows, it’s going to paint a certain image of the actual difference in heights.