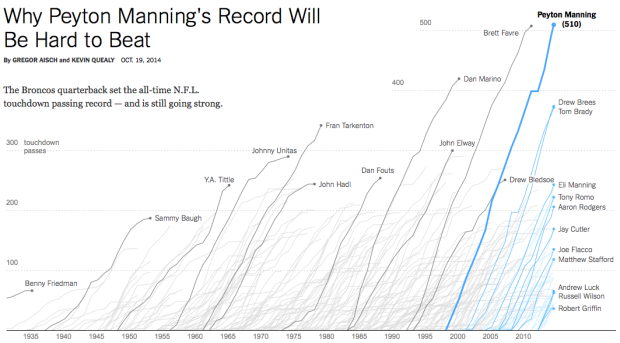 Peyton Manning, quarterback for the Denver Broncos, passed up Brett Favre’s career record of 508 passing touchdowns. Manning, currently at 510 passing touchdowns, is now setting his own records that won’t be beat for a long while. Gregor Aisch and Kevin Quealy for the Upshot chart out Manning’s trajectory of quarterbacks past and present.

Those who have followed New York Times graphics might recognize a similar time series display from when baseball player Alex Rodriguez* joined the 600 home run club. Or from 2007, when Barry Bonds* chased the all-time home run record. It’s kind of fun to see the graphics grow bigger, brighter, and more open over the years. Flash disappears. Multi-line voronoi comes in.

At the base though, it’s the same chart, and it’s still good.