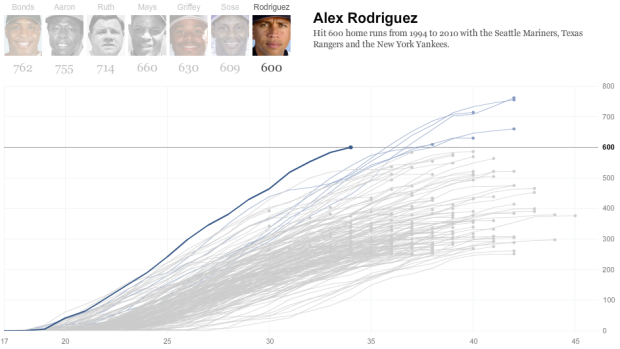 Alex Rodriguez became only the seventh player in MLB history to hit 600 home runs, at a younger age than any of the previous six by far. Amanda Cox and Kevin Quealy of The New York Times visualize home run counts for Rodriguez and other big hitters. It’s similar to the graphic NYT designed when Barry Bonds passed Hank Aaron back in 2007, except with this new one, you can sort the home run lines by season or by age.

The above is a sort by age, and the highlighted blue line is Rodriguez’ line. Clearly, he got to the 600 line before anyone else.

Sort by season and you’ll notice a higher density of home run hitters as time goes on. In the 1900s you have Babe Ruth pretty much by himself, but fast forward to now, and it’s a quite a bit more crowded. Of course, we don’t know how many names require asterisks.