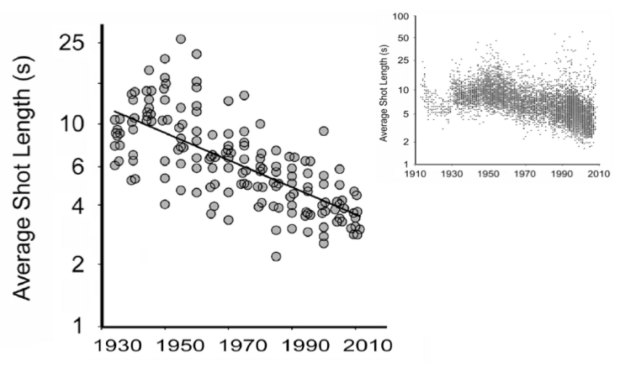 We know that movies have changed over the decades. We’ve seen it in declining ratings and box office hits versus Oscar winners. However, these are changes that come along with movies rather than the movies themselves. Cornell University psychologist James Cutting looked closer at the construction of movies over the years, such as shot length, amount of motion, and use of light.

The charts above show a decrease in shot length (smaller sample of movies on the left and larger sample in the top right).

The average shot length of English language films has declined from about 12 seconds in 1930 to about 2.5 seconds today, Cutting said. At the Academy event he showed a scatter plot with data from the British film scholar Barry Salt, who’s calculated the average shot duration in more than 15,000 movies made between 1910 and 2010. That’s a lot of shots. In a 2010 study, Cutting found an average of 1,132 shots per film in a smaller sample of 150 movies made between 1935 and 2010; the King Kong remake, incidentally, had the most: A whopping 3,099 shots packed into 187 minutes.

The decrease isn’t quite as linear as the smaller sample shows, as you can see in the larger one. But the downwards trend seems clear. I hope the trend continues towards movies composed entirely of one-frame scenes.