Visual evidence that movies are getting worse 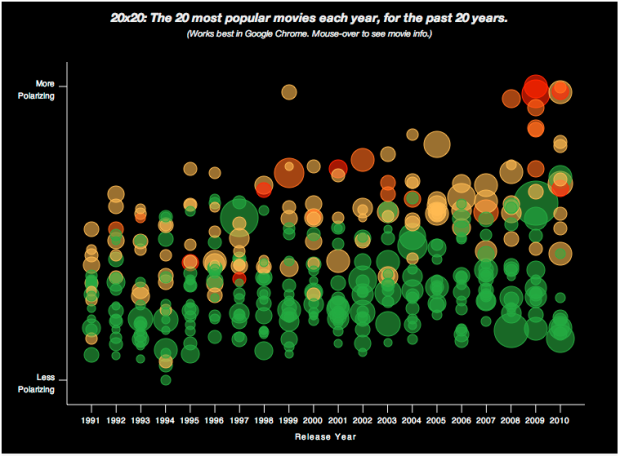 Moki takes a page out of the OkCupid social media playbook and analyzes movie ratings over the past two decades. They looked at the 20 most popular movies for each year, and then plotted them by “polarization,” or rather, standard deviation, or in other words, movies that had a wider spread of ratings were more polarizing than those where reviewers came to a consensus.

The key, we think, is to look for movies that some love and some hate, which is the likely profile of a bad movie that’s “safely” manufactured for an existing fanbase. In other words, movies that are polarizing.

Does that really make a movie bad though? My wife, a fan of the Twilight series, would disagree. Maybe what we’re seeing is not so much movies getting worse, but people who rate movies on Moki growing less neutral, because there was clearly plenty of suck in the 1990s and 2000s.

From the polarization perspective, however, the results are pretty clear. Opinions on sequels are almost always more divergent than the originals.