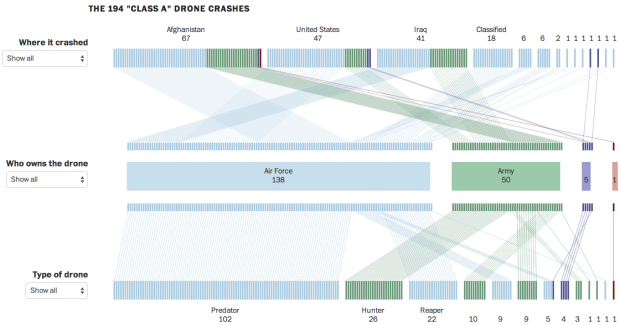 Based on data compiled from a combination of military records, Defense Department records, and drone manufacturers, Emily Chow, Alberto Cuadra and Craig Whitlock for the Washington Post provide a quick view into drone crashes.

More than 400 large U.S. military drones crashed in major accidents worldwide between Sept. 11, 2001, and December 2013. By reviewing military investigative reports and other records, The Washington Post was able to identify 194 drone crashes that fell into the most severe category: Class A accidents that destroyed the aircraft or caused (under current standards) at least $2 million in damage.

The top row represents where a drone crashed, the second row who owns it, and the third tells the type. Mouse over any of the tick marks, and you get details for the corresponding crash.