Every known drone attack in Pakistan 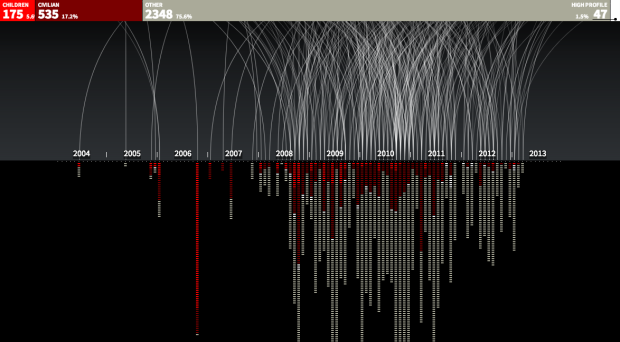 It’s hard to know the impact of drone attacks as outsiders looking in, because the United States government doesn’t disclose the information. Using data maintained by the Bureau of Investigative Journalism, which is estimates based on reports from the ground, Pitch Interactive sheds some light on every known drone attack in Pakistan.

Since 2004, the US has been practicing in a new kind of clandestine military operation. The justification for using drones to take out enemy targets is appealing because it removes the risk of losing American military, it’s much cheaper than deploying soldiers, it’s politically much easier to maneuver (i.e. flying a drone within Pakistan vs. sending troops) and it keeps the world in the dark about what is actually happening. It takes the conflict out of sight, out of mind. The success rate is extremely low and the cost on civilian lives and the general well-being of the population is very high. This project helps to bring light on the topic of drones. Not to speak for or against, but to inform and to allow you to see for yourself whether you can support drone usage or not.

Again, these are estimates, so the numbers might be higher or lower, but the point is that these attacks exist, and civilians and children are often involved.