I tracked steps and sleep for the past month wearing the Jawbone UP24 wristband. It works. It’s straightforward to use. It’s not perfect. I’m gonna keep wearing it. 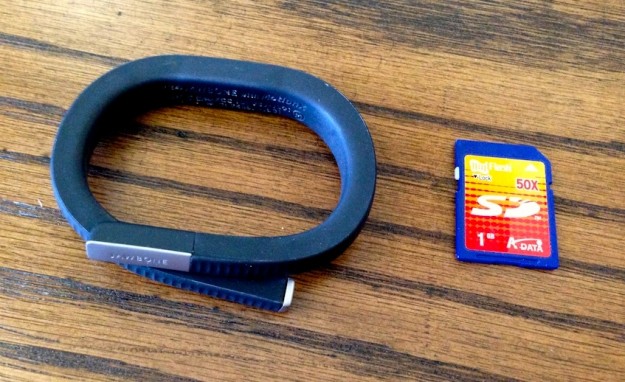 Jawbone UP24 with SD card for scale

Ever since my first smartphone, I haven’t worn a device for the sole purpose of data collection. I wore a pedometer years ago. I wore a watch that tracks sleep, which was uncomfortable, chunky, and required a USB plugin for syncing. These days, with a combination of apps and manual methods of data collection, I didn’t see a need.

However, I recently took a more active approach to losing my graduate school weight, which was one or two pounds a year. It didn’t seem like much as it happened, but then seven years passed.

I shopped around before settling on the Jawbone UP24. Like most people, I went to the Amazon fitness trackers category and read reviews to form an initial opinion. The Fitbit One and the more compact Fitbit Zip were actually the top reviewed fitness trackers, both at 4 and a half stars and thousands of reviews. That sounds great, and it appears that most people who get the Fitbit are happy with it. My sister and brother-in-law both have the Fitbit Flex, and they like it.

But, data export is a premium feature. You can view your data through Fitbit’s site and app, but you have to pay an annual fee to download your daily data.

That was a deal breaker. First, I knew I was going to download that data eventually, and I didn’t want to pay for it. Second, it was only daily aggregated data, and I want information during the day, not just at the end. So Fitbit was out.

The main selling point was that the hourly data was available via the API, and I could download daily data as CSV files, without having to pay a premium.

This clearly puts me in the minority.

Out of the 444 current UP24 reviews on Amazon, not one mentions data export. Out of thousands for the Fitbit devices, data export is mentioned in the single digits, basically only in passing.

From the UP for Developers homepage

Anyway, that’s pretty much all I had to hear. I looked at other devices, but they either didn’t have a straightforward way to download your data or had an API “in the works.” Some people mentioned the Nike FuelBand, but that seems to be ending soon, and I didn’t want to pay for a soon-to-be-defunct device.

I also disregarded most of the negative reviews for the UP24 on Amazon. People said things like, “I can’t believe it doesn’t have a heart rate monitor!” or “Piece of junk doesn’t have GPS.” I don’t understand that attitude that everything should have everything, and everything that doesn’t have everything is stupid. There was a full review from a tech site that said the band was a failure because it didn’t have a display on it. That was actually a plus for me.

Wearing the UP24 is essentially the equivalent of wearing a watch. It’s lightweight, comes on and off easily, and sometimes you notice it’s there and sometimes you forget about it. Reviews for the UP24 seemed to agree. Some people complained about other devices irritating the skin, so I’d watch for that if you go with something other than the UP24.

My one annoyance is that the UP24 sometimes gets in the way when I use my computer. The band rubs against my desk as I use my mouse and I’m not ergonomically correct (which is often). I can still type just fine, but I’m finicky, so I take the band off when I work sometimes.

I use the opportunity to charge it via the USB dinglehopper, which you only have to do once a week. It takes about an hour to fully charge.

Getting started was straightforward. I downloaded the Jawbone app, turned on bluetooth, and the step-by-step instructions took me through. I was collecting data in a few minutes.

The band itself has one button at the end, which lets you switch between a handful of modes. Press it once to switch between sleeping and awake. Press it twice and hold to take a power nap.

One handy feature was the wake up through vibration. You can set an alarm that wakes you up during an ideal time window, based on your sleep. The idea is to wake you up during light sleep, so that you don’t feel groggy waking up from a deep slumber. I used this a few times early on, and it seemed to work as advertised. I turned it off though, because I found that my son making noises through the baby monitor was enough of an alarm for me. 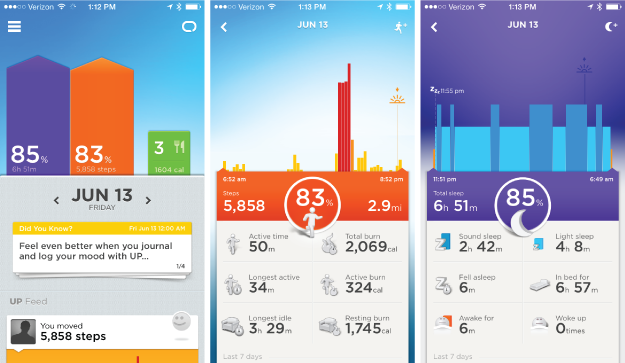 Each morning, I glance at my sleep pattern through the app, and it’s kind of fun to see something you’re typically not aware of. I often think to myself, “Ah, so that’s why I feel so tired.” after seeing that I woke up several times through the night.

My step count grows less interesting though, mostly because I’m not aiming towards the recommended 10,000-step goal. At first, it was fun to see the contrast between days I took care of my son and the days I sat at my computer. I walked the equivalent of a few miles for the former and was essentially a sloth for the latter.

I still wear the band 24/7, just about. The UP24 description says it’s okay to wear it when you shower, but I don’t do step aerobics in there, so I just take it off.

I made the mistake of leaving the band on during a bike ride. I use Strava to track my rides, and I linked it with the Jawbone service. (I also have MyFitnessPal linked for caloric intake.) So the ride got logged to the Jawbone database through Strava, but steps were logged at the same time. I thought Jawbone would smartly account for the time overlap, but it looks like I took over 20,000 steps that day. In reality, it was probably closer to 6,000.

I was disappointed that there was no web interface to edit such errors or to look at my data more closely. But maybe that’s what the API is for.

Back to data exports. The app is playful and straightforward, but at some point I want to look at my data from my own point of view. I tend to be more interested in what my data from 10 years ago looks like than what the data from 10 minutes ago says.

You also never know when a service is going to just end, and it’d be a shame to lose all your data to a company redirection.

There are a few ways to get your UP24 data:

The first is easy but difficult to find. Go to the Jawbone site, log in, and then select Settings. Click on the Accounts tab, and there are links to your data for each year. The CSV gives you a row of data for each day you used the band. 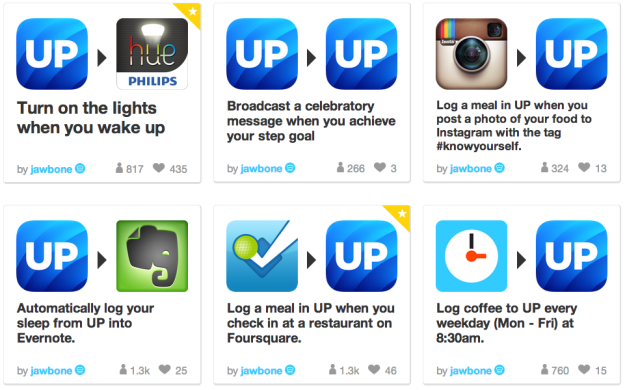 The second method is equally easy if you’re familiar with IFTTT. It’s a service that lets you link APIs from various services through an easy to use interface. There are existing Jawbone recipes and you can make your own, but the most common one export-wise is to send your daily data to a Google spreadsheet.

One popular recipe turns on the lights when you wake up. I wonder if I can setup a recipe that also makes me coffee and breakfast, gets me dressed, and brushes my teeth, George Jetson style.

Grabbing your data via the UP API is less straightforward, but it’s the only way to get hourly data. I messed around with it a little bit and never got it to work quite right. At least I know it’s there though.

The API was built mostly for other apps to access and interact with the UP24-produced data, and I didn’t find many examples. I asked the Jawbone development team if they had any wrappers available, but they didn’t at the time. Hopefully that changes, or I’ll just have to fuss with it more when I want to get my intraday data out.

The UP24 is a device that you can forget about. Some might argue for an on-band display, but I appreciate the simplicity of just a plain band on my wrist.

As with most self-surveillance, your data stream matures and you grow familiar with your patterns. I found this to be especially true with the step data, but I suspect it’d be different if I worked towards a daily goal. There’s no immediacy for me in the movement area.

It’s a different story for the sleep activity. I’ve always had irregular sleep, so it’s nice to work towards improving, and the UP24 is worth it just for that.

And of course, the data. I’m glad that I can download daily CSV files, but I hope that hourly data is more easily available to everyday users. Although I don’t mind writing scripts to grab my own data, not everyone has that luxury.

Bottom line: It’s been over a month, and I’m gonna keep wearing the UP24. [Amazon linkage]