An exploration of selfies 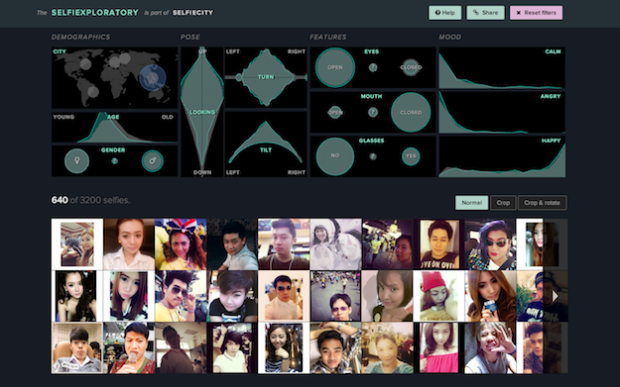 Selfiecity, from Lev Manovich, Moritz Stefaner, and a small group of analysts and researchers, is a detailed visual exploration of 3,200 selfies from five major cities around the world. The project is both a broad look at demographics and trends, as well as a chance to look closer at the individual observations.

There are several components to the project, but Imageplots (which you might recognize from a couple years ago) and the exploratory section, aptly named Selfiexploratory, will be of most interest.

The two parts let you filter through cities (Bangkok, Berlin, Moscow, New York, and Sao Paulo), age, gender, pose, mood, and a number of other factors, and this information is presented in a grid layout that self-updates as you browse.

So you can get a rough sense of how facets relate. There seems to be a higher proportion of female selfies and average age seems to skew towards younger as you’d expect. The average age of females in this selfie sample seems to be younger than that of males.

However, before you jump to too many conclusions about how countries vary or differences between the sexes, etc, consider the classification process, which was a combination of manual labor via Mechanical Turk and face recognition software. Age, for example, can be though to estimate from pictures alone since you have outside factors like makeup, angles, and poses. Do these things account for the two- to three-year average difference between the sexes? Maybe. So consider the data. But that should go without saying.

That said, Selfiecity is a fun one I spent a good amount of time browsing. It’s a weird, tiny peek into 3,200 people’s lives, with a dose of quant and art. And don’t miss the theoretical component in essay format, a reflection of social media, communities, and the self.