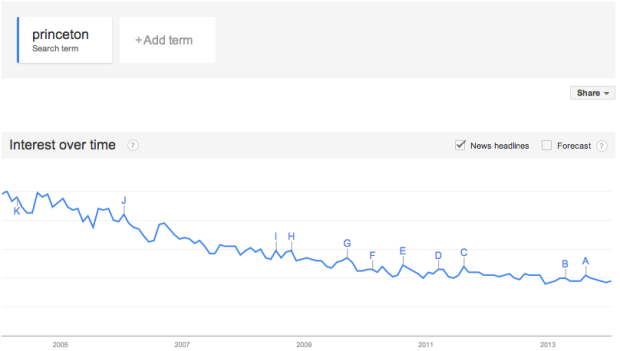 Researchers at Princeton released a study that said that Facebook was on the way out, based primarily on Google search data. Naturally, Facebook didn’t appreciate it much and followed up with their own “study” that debunks the Princeton analysis, blasted with a healthy dose of sarcasm. They also showed that Princeton is on their way to zero-enrollment.

This trend suggests that Princeton will have only half its current enrollment by 2018, and by 2021 it will have no students at all, agreeing with the previous graph of scholarly scholarliness. Based on our robust scientific analysis, future generations will only be able to imagine this now-rubble institution that once walked this earth.

While we are concerned for Princeton University, we are even more concerned about the fate of the planet — Google Trends for “air” have also been declining steadily, and our projections show that by the year 2060 there will be no air left

Crud. Dibs on the oxygen tanks.