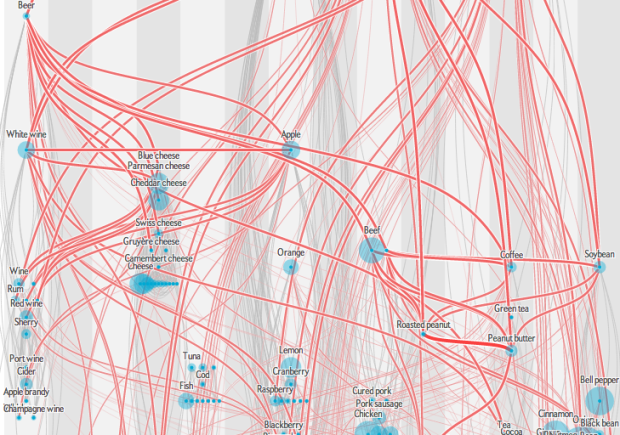 Julia Child famously said that fat carries flavor, but perhaps instead we should give thanks to 4-methylpentanoic acid. Unique combinations of such chemical compounds give foods their characteristic flavors. Science-minded chefs have gone so far as to suggest that seemingly incongruous ingredients—chocolate and blue cheese, for example—will taste great together as long as they have enough flavor compounds in common. Scientists recently put this hypothesis to the test by creating a flavor map, a variant of which we have reproduced here.

The original by Yong-Yeol Ahn et al was a more traditional network graph. Foods with more similar flavor compounds were closer together. In contrast, Tulp categorizes points in vertical columns by their food group and are placed based on number of shared compounds with other foods.

It’s spaghetti at first, but give it some mental time and filter with the interaction. Start from the top at roasted beef and work your way down.