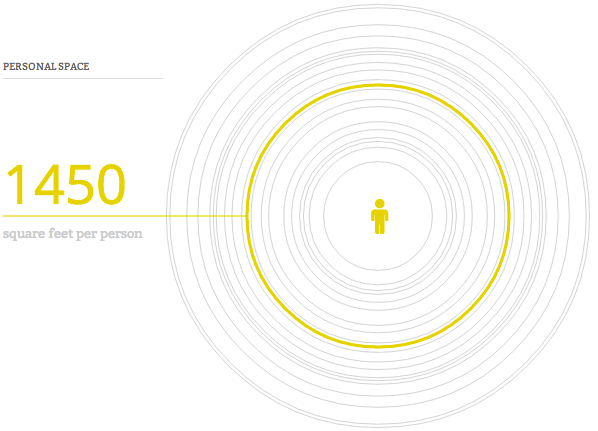 How much space is there per person in different countries? Andrew Bergmann for CNNMoney took a look.

Population density measures the amount of people in a given area, generally per square kilometer or mile. It’s difficult to get a clear image of what these vast spaces actually represent, so I thought that it would be interesting to flip the equation on its head and figure out how much space there is on average per person.

The interactive shows 20 countries and each is represented by a circle sized by average square feet per person. Of course, as with population density, this data is broad with land distribution and usage to consider, but it’s informative from a general viewpoint. Although the math might be slightly off in the square feet calculation. Or maybe that’s just rounding.

I’m surprised I haven’t seen something like this before. See population density from the more traditional point of view here, here, and here. Oh, and here. I think the last one is my favorite.