The most poisoned name in US history 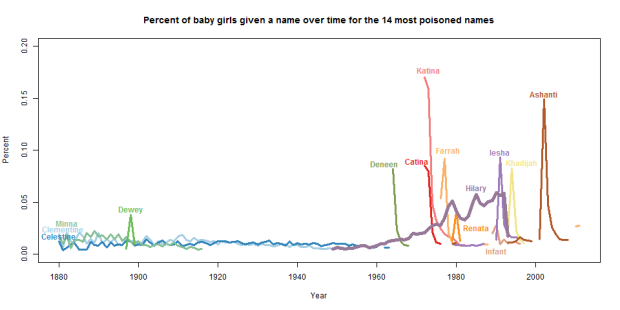 Biostatistics PhD candidate Hilary Parker dived into the most poisoned names in US history. Her own name topped the list. There were several fad names such as Deneen, Catina, and Farrah that saw a quick spike and then a plummet, but the trend for Hilary is different.

“Hilary”, though, was clearly different than these flash-in-the-pan names. The name was growing in popularity (albeit not monotonically) for years. So to remove all of the fad names from the list, I chose only the names that were in the top 1000 for over 20 years, and updated the graph (note that I changed the range on the y-axis).

I think it’s pretty safe to say that, among the names that were once stable and then had a sudden drop, “Hilary” is clearly the most poisoned.

There it is minding its own business, enjoying a steady rise in popularity over a few decades, and then boom, Bill Clinton is elected, and the name dies a quick death.

Be sure to check out the rest of the analysis. Good stuff. [Thanks, @hspter]