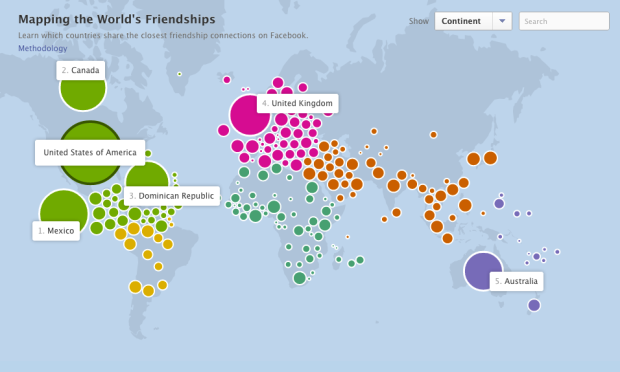 As part of the Stories initiative that Facebook launched yesterday, an interactive map by Stamen Design shows how people are connected on Facebook, which offers a view into how countries are linked by language and history.

Immigration is one of the strongest links that seems to bind these Facebook neighbors, as thousands of people pour over borders or over seas, seeking jobs or fleeing violence, and making new connections and maintaining old friendships along the way. Economic links, through trade or investment, also seem to be strong predictors of country connectedness. And finally, one of the most overwhelming trends we found as we explored this graphic is the strong tie that remains between nations and their former colonizers, whose continued linguistic, cultural, and economic ties still echo today.

Stamen also explained other interesting facets in the map.

When you click on a country, the map updates to show where friends of those in that country are from. The top five are labeled. So whereas previous Facebook maps showed all connections at once, which focused on how many people use the service, this one focuses on the actual connections and what they mean.