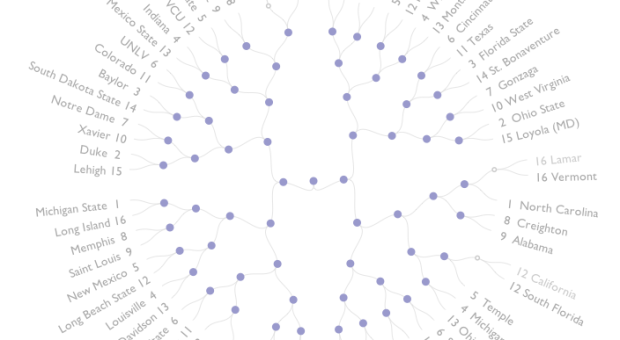 With NCAA March Madness in full swing, the basketball graphics are out in full force. This one by Angi Chau, shows the probabilities of teams winning each game, and eventually the championship, based on simulated bracket rankings. Done with D3, each node represents a game and teams are circled on the outside. Roll over a team, and get all the probabilities for that team going to the end or roll over a game to see the probability of teams winning that game. Sorry, Colorado. You have a 0% chance of winning it all. You, too, Vermont.

Hopefully, Chau keeps updating throughout the tournament. And maybe some color-coding to indicate probabilities would be useful here. Now excuse me while I go place some educated bets. (One million on Colorado.)