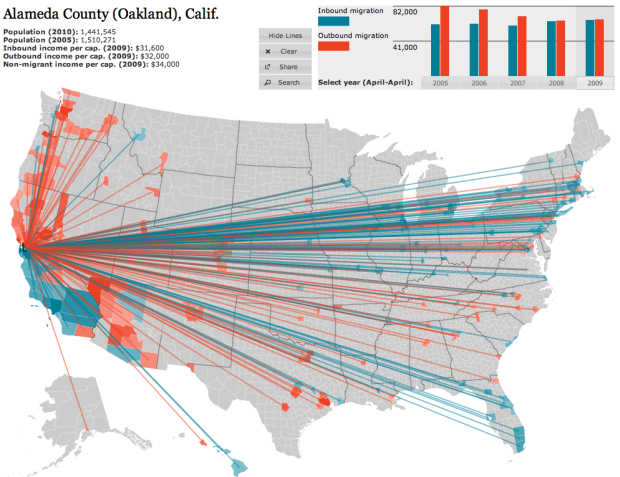 Each move had its own motivations, but in aggregate they ­reflect the geographical marketplace during the boom and bust of the last decade: Migrants flock to Las Vegas in 2005 in search of cheap, luxurious housing, then flee in 2009 as the city’s economy collapses; Miami beckons retirees from the North but offers little to its working-age residents, who leave for the West. Even fast-growing boomtowns like Charlotte, N.C., lose residents to their outlying counties as the demand for exurban tract-housing pushes workers ever outward.

Compared to last year’s map, this one is much improved. The colors are more subtle and more meaningful, and you can turn off the lines so that it’s easier to see highlighted counties when the selected county had a lot of traffic during a selected year. Speaking of which, you can see map the data for 2005 through 2009 via the simple bar graphs in the top right.

Update: Jon also explains how he built this map sans-Flash on his own blog.