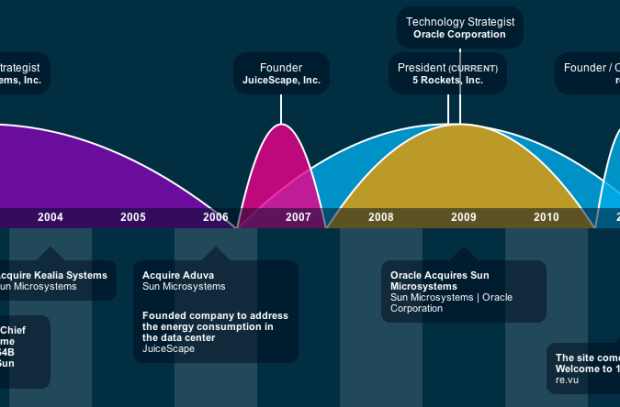 A couple of infographic résumé sites, vizualize.me and re.vu, sprouted up that use your LinkedIn data to show your career stats. Just create an account, connect it to LinkedIn, and you get some graphs that show when and where you worked. It’s a visual form of your LinkedIn profile with a goal to replace the “old” and “boring” résumé that uses just text.

Is this the best way to go though, if you’re applying for a job?

Other than commissioning a couple of freelancers based on their portfolios and recommendations, I haven’t had any experience hiring people, but I imagine being turned off by such an infographic résumé if I were a HR person. The visual format is easy to scan, but because it it’s not a traditional text layout, I’d have to figure out what I was looking at first.

Or let’s say more people start submitting these sort of résumés. Then the novelty, the main advantage, wears off and they all start to look the same.

The first infographic résumé I remember was by Michael Anderson in 2008. 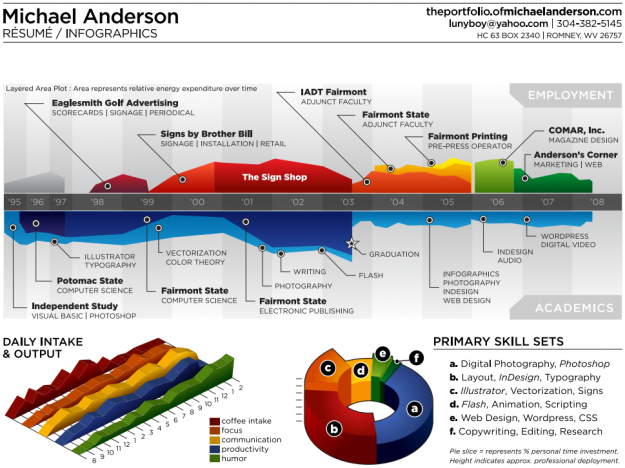 There were probably others before it, but this was the first that was shared a lot across the Web. It was new and creative and worked well for the type of job Anderson was looking for. Copycats followed that were less amusing than the one before.

If you were to apply for similar jobs as Anderson with an automatically generated résumé, it’d be less impressive, because the creation was a way to show a portion of his skill set, whereas you’re just pointing and clicking with these sites.

Maybe you’re looking for a different sort of job. Would those employers appreciate this sort of résumé? Again, it’s hard for me to say. But I imagine them appreciating a thoughtful cover letter with a CV with the most important stuff at the beginning than they would about bar graphs and humps (with a meaningless vertical axis) that show a space-hogging timeline. I’m all for visualizing things (especially bits of your life), but words can also be meaningful.