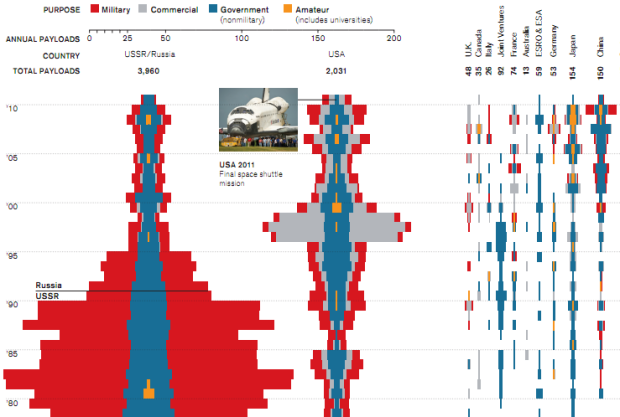 With the end of NASA’s human spaceflight program, Tommy McCall and Mike Orcutt for Technology Review explore space launches, since Sputnik 1 went into orbit in 1957. While humans won’t be going up in space for NASA anymore, that doesn’t mean there won’t be anything launching into space.

Of the 7,000 spacecraft that have been launched into orbit or beyond, more than half were defense satellites used for such purposes as communication, ­navigation, and imaging. (The Soviet Union sent up a huge number, partly because its satellites tended to be much shorter-lived than those from the United States.) In the 1970s, private companies began increasingly adding to the mix, ­launching satellites for telecommunications and broadcasting.

The stacked bar turned rocket blast aesthetic is a nice touch. Time runs on the vertical and launches are split by country, where USSR/Russia and the United States of course lead the way. The bigger the blast, the more launches for a given country. Color represents purpose of launch. I like it.