Earth-orbiting satellites, all of them 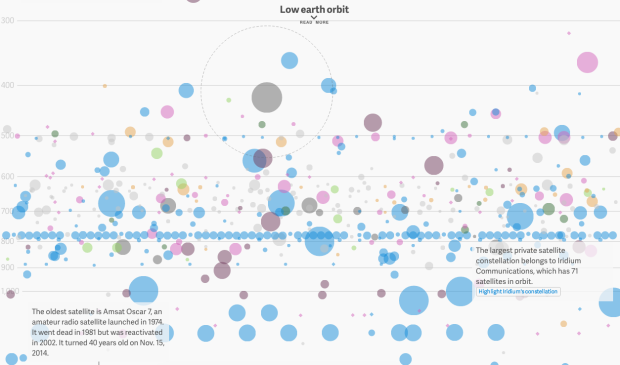 David Yanofsky and Tim Fernholz for Quartz visualized the satellites orbiting Earth. There’s a lot of them.

There are more than 1,200 active satellites orbiting earth right now, taking pictures, relaying communications, broadcasting locations, spying on you, and even housing humans. Thanks to a database compiled by the Union of Concerned Scientists, we can show you each one, as of August 21, 2014.

As you scroll down, you see satellites that are farther from the Earth’s surface. The horizontal position seems to just be a uniform placement for satellites at the same level.

By the way, I realize 1,200 satellites seems like a lot, but just for context: At the time I’m writing this (in the mid-afternoon on a weekday), there are about 7,800 commercial flights in the air.