All the countries that the US owes money to 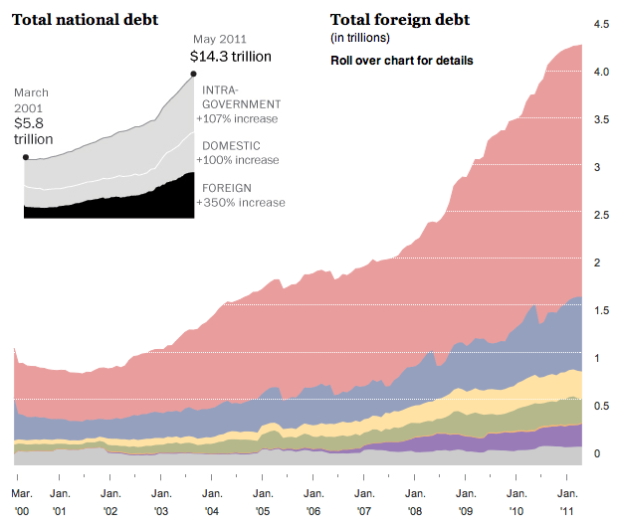 In May 2011, the United States owned $14.3 trillion in debt. A lot of that is money is owed to other countries. Heather Billings and Todd Lindeman of The Washington Post break foreign debt down by continent and then by country.

Foreign investors hold the largest share of the national debt. Estimated foreign holdings of U.S. Treasury securities have more than quadrupled since 2001. Some experts worry about the geopolitical consequences of foreign governments investing so deeply in U.S. Treasurys. But the investments also tie the fortunes of foreign governments more closely to those of the United States.

It’s your standard interactive stacked area chart, except when you click on a layer in the initial view, which shows a break down by continent, you get a finer grained view with debt broken down by country. Instead of all the layers fading and reappearing on a selection, I would’ve liked to see a smoother transition like previous stacked charts, with country lines appearing at the end. This might help readers keep with the context better. Still good work though.