The Joy of Stats with Hans Rosling 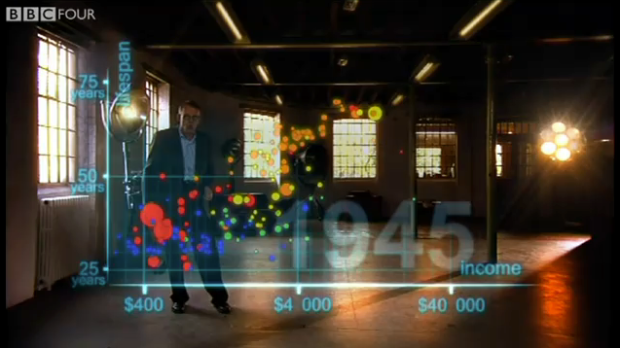 The Joy of Stats, a one-hour documentary, hosted by none other than the charismatic Hans Rosling, explores the growing importance of statistics:

[W]ithout statistics we are cast adrift on an ocean of confusion, but armed with stats we can take control of our lives, hold our rulers to account and see the world as it really is. What’s more, Hans concludes, we can now collect and analyse such huge quantities of data and at such speeds that scientific method itself seems to be changing.

From the description, it sounds like they’ll touch on Crimespotting by Stamen, Google Translation, among other data-driven projects. Whatever they cover, it’s bound to be interesting with Rosling at the front.

Below is a four-minute clip of Rosling presenting world development in the context of income versus lifespan. The material is more or less the same as his TED talk, but this time around, the motion chart isn’t projected on a screen. The data is CGI’d into the air where Rosling can pluck and grasp at points as he highlights the significance of specific points in history. Zoink.

The Joy of Stats airs on the BBC next Tuesday. I really hope they put the full documentary online, but if not, I won’t complain if someone accidentally records it and uploads it to YouTube.