Where your neighbors commute to and from 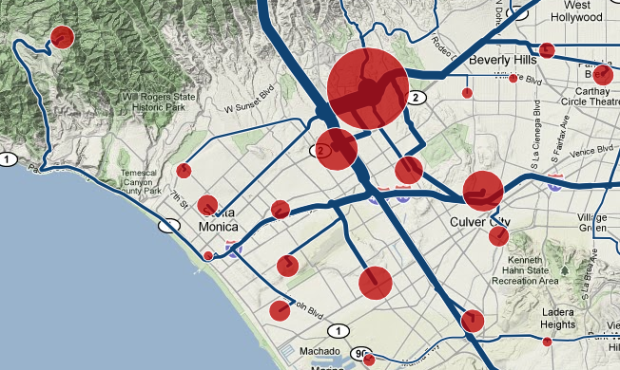 Some people live in areas where a one-hour commute both ways is common, while others practically live across the street from their workplaces. Engineer slash designer Harry Kao has an interactive look at commuting by zip code:

In Traffic: Why We Drive the Way We Do (and What It Says About Us), the author states that commute times throughout history have remained steady at roughly a half hour in each direction. Advances in transportation technology (our feet, horses, bicycles, trains, automobiles, flying cars, etc.) allow us to live farther from where we work. This got me thinking about my own commute from Berkeley to San Francisco, how it compares to those of my neighbors, and how commutes vary across the country.

Using commute data from Census Transportation Planning Package and travel times from the Google Maps API, an interactive map lets you see where people in your area commute to or from. Enter your zip code and explore.

Red dots are sized by number of commuters go in and out of the zip code area, and blue trails indicate direction. The above, for example, is the view of people from all over commuting to UCLA.

One drawback is that the commuter data from now defunct CTPP is from 2000, so it’s not completely up-to-date, especially in the rapidly developing areas, but it will give you a pretty good idea. The map should be particularly useful to those (like me) considering a job or a move to somewhere with commute times.