$8.7b Iraq development funds unaccounted for 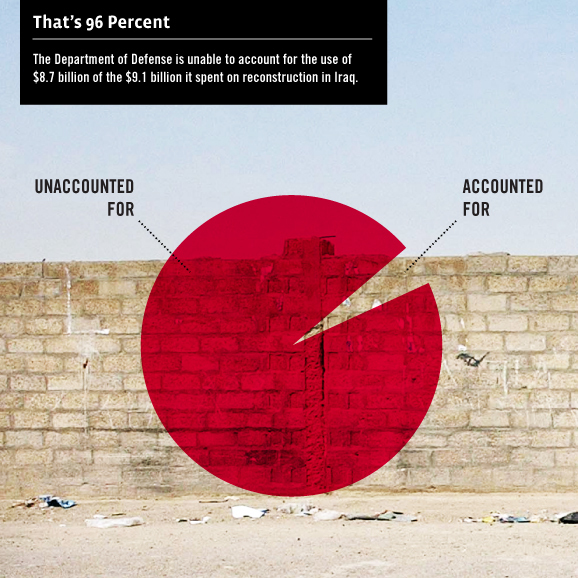 A simple question from GOOD magazine: where did the money to rebuild Iraq go? In 2003, the Development Fund for Iraq (DFI) was established for the benefit of the country’s people. The Department of Defense (DoD) managed that money. According to a report [pdf] from the Special Inspector General for Iraq Reconstruction:

Weaknesses in DoD’s financial and management controls left it unable to properly account for $8.7 billion of the $9.1 billion in DFI funds it received for reconstruction activities in Iraq. This situation occurred because most DoD organizations receiving DFI funds did not establish the required Department of the Treasury accounts and no DoD organization was designated as the executive agent for managing the use of DFI funds. The breakdown in controls left the funds vulnerable to inappropriate uses and undetected loss.

That’s 96% of 9.1 billion dollars that we apparently have no clue about how it was spent. What?