Redesign of the Federal IT Dashboard 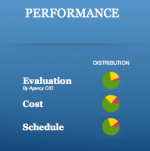 About a year after the launch of the Federal IT Dashboard, business intelligence consultancy Juice Analytics focuses on five areas — message, flow, charts, context, and design fundamentals — where the dashboard could use some improvement.

The first tip on message:

The information designer is responsible for presenting the data in a way that the message is delivered in a clear and understandable way. If the data is left to speak for itself, users can be left confused or frustrated. And in all likelihood they won’t to [sp] see the full value of the data. That’s particularly tough for this Federal IT Dashboard where a huge amount of effort has been put into gathering consistent data across agencies.

See the rest of the redesign on Juice Analytics (who is hiring, by the way).