This is a guest post by Alastair Dant, interactive lead at the Guardian. He describes the efforts that went into designing the recently published war logs map of incidents revealed by Wikileaks.

Our site editor approached me with a serious challenge: could I visualize six years worth of military reports? Up in their makeshift war room, our team introduced me to Julian Assange. While reporters from the New York Times and Der Speigel took photos and video, the director of Wikileaks booted his encrypted netbook and showed me a page from the war logs. I may have looked a little distressed. The gravity of this material was stark and, having never dealt with such documents before, I was uncertain if I wanted to start.

After several days feeling like I’d walked into the Bourne trilogy, David Leigh and Rob Evans put my mind at rest. We wouldn’t be publishing any material that might put anyone at risk and my work could focus on charting the rise in explosive devices from 2004 – 2009.

By this point, our datablog editor was already knee deep in war logs. Simon Rogers and I sat down and figured out what would be needed to drive the visualization. The full logs contain over 90,000 records and would be far too bulky to show in their entirety. We selected a series of pertinent fields and he produced a redux containing just these columns for the IED events. Most significantly, we left out the full text field containing summary report text. With no time to check all 16,135 records for sensitive information, it was best to remove this information entirely. This had the added benefit of greatly reducing the amount of data that needed to be loaded and parsed. The resultant CSV weighs in under 2mb and is probably approaching the upper limit of what can be sensibly loaded without paging.

This brings me on to what may have been the most critical implementation detail. What would the best client side technology be for plotting all these data points in an interactive form? We initially looked into a pure JavaScript approach but decided against it on several grounds. First, the total number of markers needing to be plotted concurrently might exceed the capabilities of the Google Maps JS API. Second, immediate mode rendering can really impair frame rates when large numbers of objects need to be added or removed from the display list at once. Third, CS4 offers a neat workflow for taking the vector designs our graphics team produce in Illustrator and incorporating them into Flash applications. Finally, we’ve spent the last year developing a number of AS3 libraries for features like CSV handling, playable timelines and manipulating time series data. With less than two weeks to turn things around, this wealth of existent code would prove invaluable.

At the heart of our interactive lies a single, overriding problem: how can one fetch, plot and render all of the events for particular time window quick enough for the animation to run smoothly? Video playback quality requires at least 24 frames per second and – as each frame may need up to 15ms of rendering time – this leaves us with about 30ms to construct each one. In the run up to last year’s elections, the number of IEDs reported per week sometimes exceeded 250. This meant that – at worst – our software would need to figure out the times, locations, sizes and colours of several hundred markers in under 30 milliseconds. At times like this, I’m grateful for my former life as a games programmer.

In the end, the solution to this problem came in several forms. First, Flash 10 introduced a fixed-sized, strongly-typed Vector class which makes working with large arrays of data much faster. Next, I recently came across skip lists – a deceptively simple data structure that speeds up retrieval of items from time series. Finally, a number of tweaks were required to get the best possible performance from the Google Maps API. On one hand, a marker management routine incorporated object pooling, frame-to-frame reconciliation and the disposal of unused items to ensure as little processing as possible was required to update the map. On the other, two hours of hair tearing frustration yielded the following wisdom. Unless you’re careful, markers are added with a drop shadow option turned on. By default, this seems to be using a bitmap filter per sprite which causes Flash to grind to halt as soon as you need more than 50 rendered at once. This can be resolved by incorporating the drop shadow directly into your custom marker assets and then ensuring that they are cached as bitmaps. 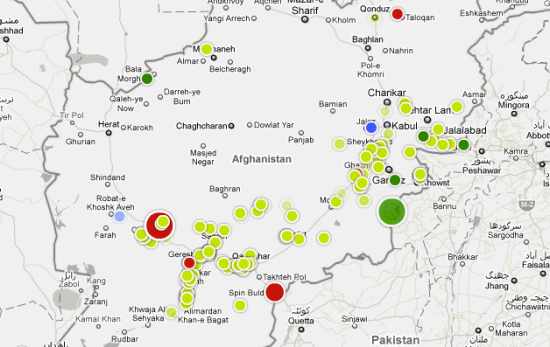 Talking of filters and Google Maps, I should take the opportunity to thank our designer Chris Fenn, who provided me with some proof of concept work he’d done to recolour their tiles in something approaching our house style by crafty application of a colour matrix filter. Moreover, all this talk of technical trickery seems to be ignoring the biggest single reason why we got things delivered in time. Mark McCormick, Paddy Allen and Michael Robinson from our graphics team supplied a combination of fresh design ideas and longstanding wisdom that proved crucial to getting something so complex planned and built so quickly. That said, I must equally credit my manager Igor Clark for his help. Never underestimate the benefits of having someone around to sound out ideas with and consume excessive amounts of caffeine.

Nathan note — My thanks to Alastair for sharing what went on behind the scenes of their interactive. Check it out for yourself on the Guardian. It’s a nice example of what comes out of a group stepping out of their comfort zone and building something more than a standard mashup.