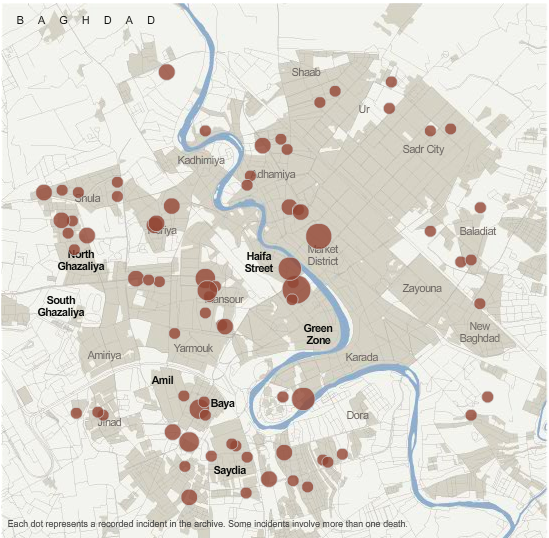 This past Friday, Wikileaks released a second batch of reports on Iraq:

At 5pm EST Friday 22nd October 2010 WikiLeaks released the largest classified military leak in history. The 391,832 reports (‘The Iraq War Logs’), document the war and occupation in Iraq, from 1st January 2004 to 31st December 2009 (except for the months of May 2004 and March 2009) as told by soldiers in the United States Army. Each is a ‘SIGACT’ or Significant Action in the war. They detail events as seen and heard by the US military troops on the ground in Iraq and are the first real glimpse into the secret history of the war that the United States government has been privy to throughout.

The New York Times has reported the data in dept with a series of maps, along with a number of articles. One maps shows one of the deadliest days in 2006 in Baghdad, when there were a reported 114 episodes of violence (above).

Below shows a wideout view, annually. As you can see, 2006 and 2007 were especially active.

The Guardian Datablog also has a rougher map via Google Maps along with processed data for download.