Data visualization continues to grow online and in the real world. It exists as masterful art pieces and amazingly useful analysis tools. In both cases though it brings data — which is oftentimes cryptic — to the masses and shows that data is more than a bucket of numbers. Data is interesting. As we collect more and more data about ourselves and our surroundings, the data and the visualization will only get more interesting. On that note, I give you FlowingData’s picks for the top 5 data visualization projects of 2008. Visualizations were judged based on the use of data, aesthetics, overall effect on the visualization arena, and how well they told a story. 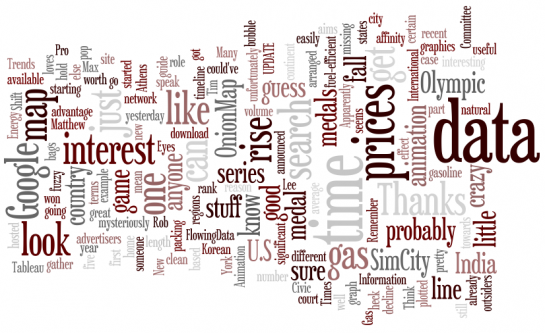 Wordle, by Jonathan Feinberg, is the word cloud revamped. Wordle caught on like wildfire across the Web as people were putting in their RSS/Atom feeds, cutting and pasting snippets, and visualizing presidential speeches. It was even added to the Many Eyes visualization toolbox. It’s hard to say what exactly made Wordle so popular, but I think it was a mix of randomness, aesthetics, and customization options. 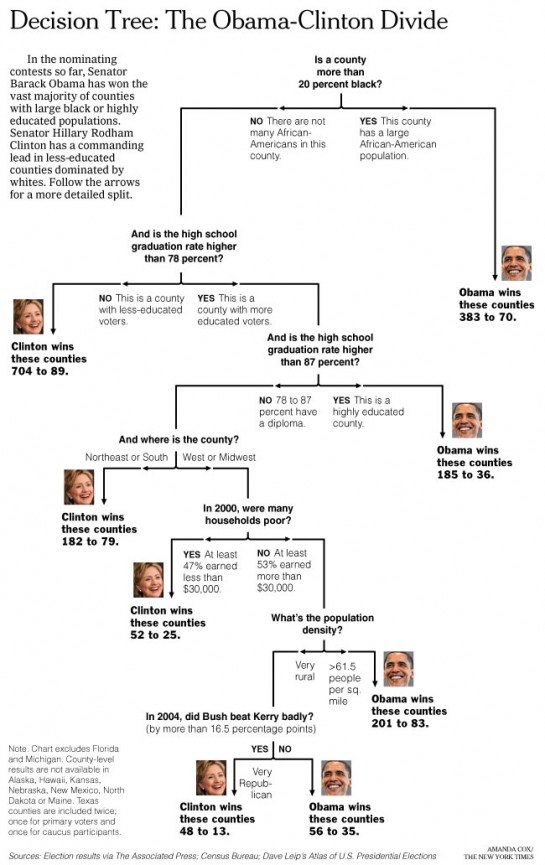 Amanda Cox of The New York Times has a knack for creating excellent graphics. She managed to make regression trees interesting and spark some heated debate with her Obama-Clinton graphic. I would also like to note that Amanda has, yes, a statistics degree. Excuse me while I beam with pride. 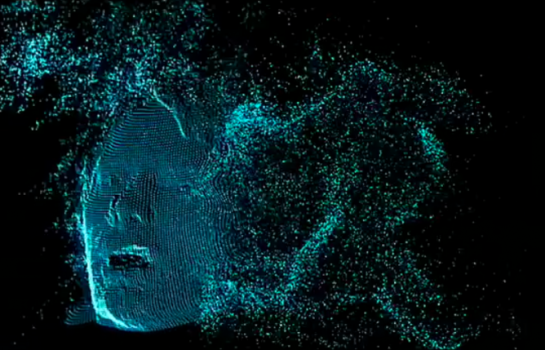 The Radiohead “House of Cards” music video was a bit different in that no cameras were used to “film” it. Instead, they used a rotating scanner and lasers to collect 3D data. What you see in the music video (below) is a visualization of all that data. The group behind the video also made the data freely available, which is icing on the cake. You don’t have to be a Radiohead fan to appreciate that. 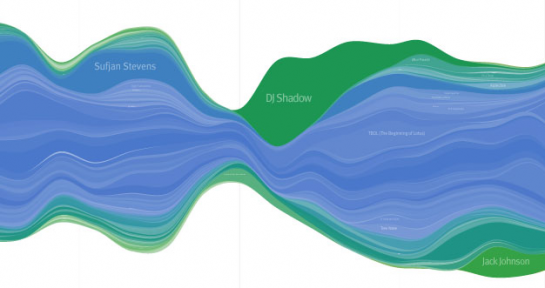 Lee Byron was certainly on to something when he created Streamgraphs to visualize music listening history on last.fm. They are a variant of stacked graphs and an improvement on Havre et al.’s ThemeRiver in the way the baseline is chosen, layer ordering, and color choice. In February 2008, Amanda Cox (yes, again), Matthew Bloch, and Shan Carter of The New York Times, together with Lee, used a similar technique to show the ebb and flow of box office receipts for 7,500 movies over 21 years. Discussion burst out across the Web — about the technique and what people were seeing in the data — that I am convinced would not have come about if instead of a Streamgraph, they used say, a stacked bar chart.

I Want You to Want Me was commissioned by New York’s Museum of Modern Art and created by Jonathan Harris and Sep Kamvar, who you probably know from past projects, We Feel Fine and Lovelines. The two are best known for the ability to tell stories with data, and it shows in IWYTWM, which explores the world of online dating. Individuals float in balloons hoping to find their match.

Here’s the video, so you can more fully appreciate the work:

This blend of art, computer science, and mathematics is beautiful.

When I first caught a glimpse of a clip from Britain from Above, I was immediately impressed, and it only left me wanting more. It was a special series on the BBC with beautiful visuals produced by 422 South. GPS traces from taxi cabs and airline flights scurried to locations; telephone communications glowed in the sky; ground lights twinkled as if the roles of sky and earth were switched; and internet traffic burst from computer to computer. With all that data on display, patterns emerged – zero air traffic in no-fly zones and taxis taking alternate routes to avoid heavy traffic.

At the time, the videos weren’t available to the U.S., but they are now, and the BBC has posted them on YouTube as well. Pretty lights:

There you have it – FlowingData’s top 5 data visualizations for 2008. It’s going to be interesting to see what comes out in 2009. Now it’s your turn. What’s on your list?