One Day in the Life of the Average American 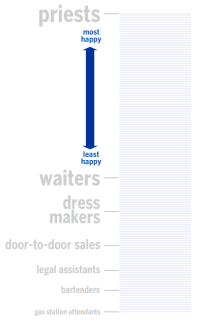 Time Magazine’s multimedia section has a fun, little piece showing some statistics for a day in the life of the average American. There’s some mapping for average commute time, annual traffic delays, and city population shifts. I’m not a huge fan of the map on the third dimension, but oh well.

There’s also a simple grid ranking jobs by level of happiness. Priests are apparently the happiest with gas station attendants at the very bottom. Poor gas station attendants. I guess I might classify myself as a computer programmer which is somewhere in between waiters and dress makers. Maybe I should consider a change in focus. Although, I could also consider myself an engineer which is towards the top of the rankings. Alright, I’m an engineer. The title of “computer programmer” has a weird stigma attached to it anyways.