A path for redesign as critique in visualization 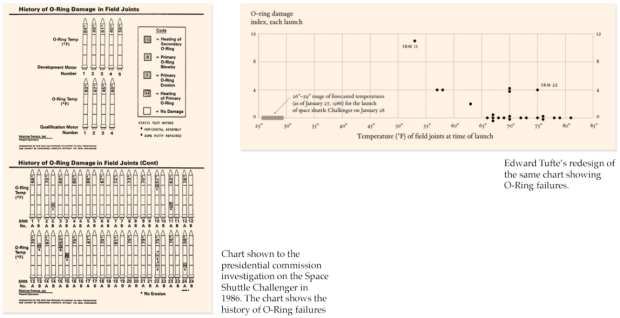 Redesigning a visualization can be useful in teaching a point. Make a graphic better (or “better” depending on what angle you’re looking from) with a different layout and visual encodings. Perhaps the most well-known is Edward Tufte’s redesign from his book Visual Explanations in which he reworks a diagram used in decision-making for the space shuttle Challenger launch.

However, Fernanda Viégas and Martin Wattenberg explain why such redesigns can be problematic and offer a more useful approach.

At the same time, redesigns can be problematic. Tufte had one huge advantage over the creators of the diagrams used to make the space shuttle decision: he knew the answer to the question they were considering, and he knew exactly which variables mattered. His redesign makes an open-and-shut case at first glance. Stare a little longer, and you realize that the bulk of the visual effect rests on just one data point, the dramatic outlier at the upper left corner. Remove that, and the trend takes a far more muted form. Would it have convinced a stubborn politician to call off the launch?

Indeed, is it really a good idea to give so much weight to a single outlying data point? Clearly in the case of the Challenger it would have been. As a general rule, though: not always. One wonders… Had the launch gone off without incident, could someone with Tufte’s skill have created, from the same data, an equally convincing graphic about the wisdom of ignoring outliers?

Viégas and Wattenberg end with three rules of engagement: (1) maintain rigor, (2) respect the designer, and (3) respect the critic. Or, “WTF” doesn’t count as useful, don’t be a jerk to others, and don’t take criticism personally.

Worth reading the whole essay.