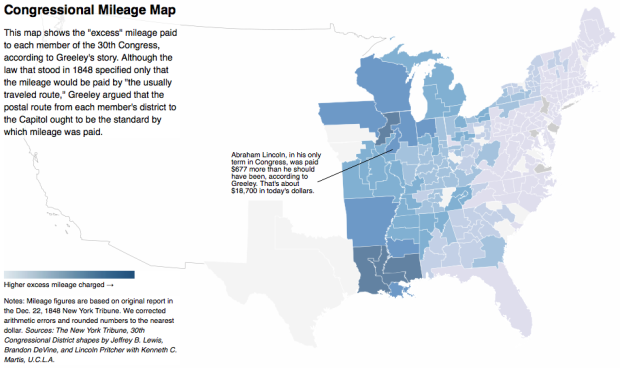 Data journalism is relatively new as a concept, but in practice it has been around for a good while. Scott Klein for ProPublica tells the story of Horace Greeley, an editor for the New York Tribune and a congressman in the mid-1800s. Greely was displeased with a law that specified mileage compensation for travel to the capital, so he found a way to prove his point with data.

Rather than simply opining against it, he conceived and published a data-journalism project that, in form if not in execution, would be very much at home in a newsroom today. He asked one of his reporters, Douglas Howard, a former postal clerk, to use a U.S. Post Office book of mail routes to calculate the shortest path from each congressman’s district to the Capitol, and compared those distances with each congressman’s mileage reimbursements. On Dec. 22, 1848, with Greeley now simultaneously its editor and a brand new congressman from New York, the Tribune published a story and a table in two columns of agate type. The table listed each congressman by name with the mileage he received, the mileage the postal route would have granted him and the difference in cost between them. “Let no man jump at the conclusion that this excess has been charged and received contrary to law,” wrote Greeley in the accompanying text. “The fact is otherwise. The members are all honorable men — if any irrelevant infidel should doubt it, we can silence him by referring to the prefix to their names in the newspapers.”