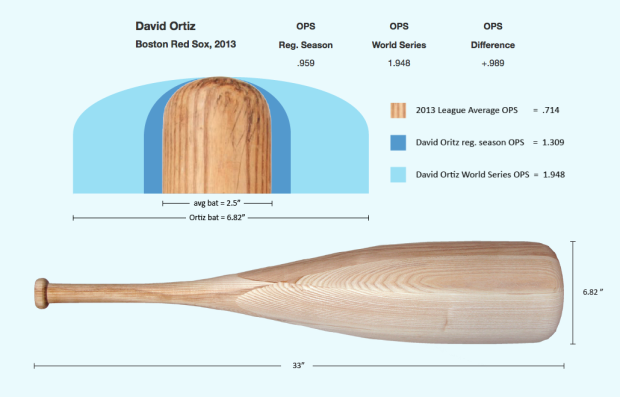 When a baseball player is hitting well, commentators will sometimes say that it looks like he’s hitting with a bigger bat out there. The ACME Catalog, a creative technology studio, took the phrase to a more literal sense. They used baseball bats to represent on-base plus slugging (OPS), “the ability of a player both to get on base and to hit for power,” for standout players during the regular season versus the World Series.

The standard baseball bat is about two and a half inches in diameter, which was used to represent the league average OPS. With a quick calculation, find how much greater a player’s OPS is compared to the league average, and then translate that to bat size. My one concern is that they scaled by diameter rather than circumference (or volume), so when you look at a bat from the top or at an angle, a player’s bat perhaps looks a bit bigger than it should.

But if you look at it profile — the actual hitting area — then it’s like you’re dealing with a two-dimensional rectangle. So in that case, it might be okay. I’m not sure. I do know that I like the idea, and bonus points for making actual bats.

More on the process in the video below.