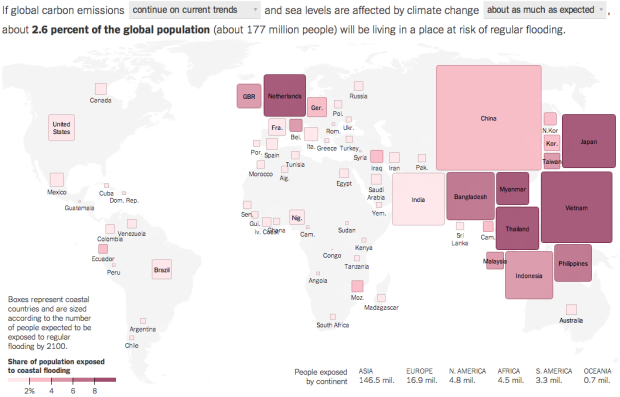 As you may or may not know, climate change could bring with it other effects besides our average days getting warmer. Flooding is one of these other things. Based on data from research by Climate Central, Gregor Aisch, David Leonhardt and Kevin Quealy for the New York Times mapped flood risk by country with a cartogram.

Globally, eight of the 10 large countries most at risk are in Asia. The Netherlands would be the most exposed, with more than 40 percent of its country at risk, but it also has the world’s most advanced levee system, which means in practice its risk is much lower.

Some countries in Asia may choose to emulate the Dutch system in coming decades, but some of the Asian nations are not wealthy and would struggle to do so.

Each rectangle represents a country, and the size represents how many people are expected to experience regular flooding by the year 2100. Color indicates the estimated percentage of a country’s population to feel the effects. So as expected, you see a lot of big rectangles and dark colors in the Asian countries.

See also Stamen Design’s flood maps, also in collaboration with Climate Central, from a couple of years ago.