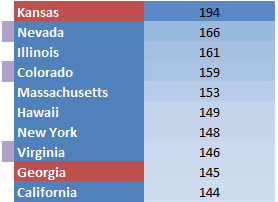 Okay, the result statement sounds a little weird, but when you look at the rates, the conclusion seems clear. The states with the highest viewing per capita is shown above, and for some reason Kansas is significantly higher than everyone else. Way to go.

For a clearer view, Christopher Ingraham charted the same data but incorporated the percent of Obama voters for each state. Interpret as you wish:

Update: Be sure to read this critique for a better picture of what you see here.