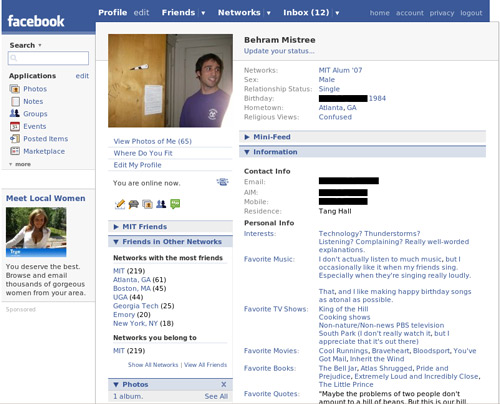 After analyzing 4,080 Facebook profiles from the MIT network, we determined that the percentage of a given user’s friends who self–identify as gay male is strongly correlated with the sexual orientation of that user, and we developed a logistic regression classifier with strong predictive power. Although we studied Facebook friendship ties, network data is pervasive in the broader context of computer–mediated communication, raising significant privacy issues for communication technologies to which there are no neat solutions.

Gay men had around seven times more gay friends than straight men on average. I imagine similar results for other demographics such as age and race. Although, their predictions weren’t full proof with 17 percent of gay men in their test data misclassified as straight and 22 percent of straight men misclassified as gay, which carries plenty of real world problems.

In any case, the results aren’t surprising. Just filing this under the things that others can know about you without actually knowing you.