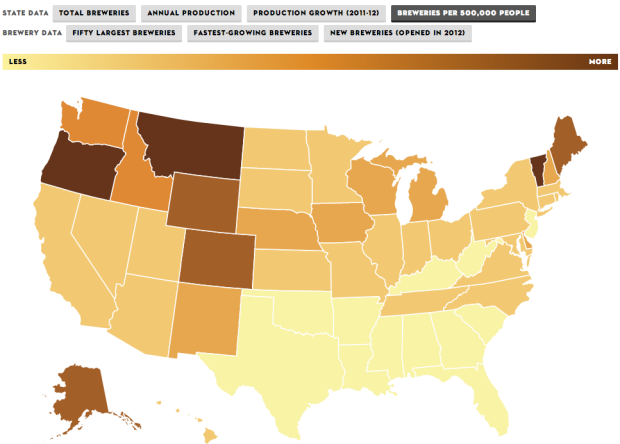 The Brewers Association just released data for 2012 on craft beer production and growth. The New Yorker mapped the data in a straightforward interactive.

As of March, the United States was home to nearly two thousand four hundred craft breweries, the small producers best known for India pale ales and other decidedly non-Budweiser-esque beers. What’s more, they are rapidly colonizing what one might call the craft-beer frontier: the South, the Southwest, and, really, almost any part of the country that isn’t the West or the Northeast.

Most articles and lists on craft beer tend to focus on total production and breweries, so California, a big state with a lot of people, always ends up on top. And as a Californian, I’m more than happy with my access to all the fine brews around here, but clearly, there are many more states to visit. RV trip anyone? [via @kennethfield]

Keep Them Separated – The Process 161

Data Visualization Freelance Advice, from Someone Who Doesn’t Freelance and Has No Clue What He is Talking About – The Process 160

How to Make Print-ready Graphics in R, with ggplot2