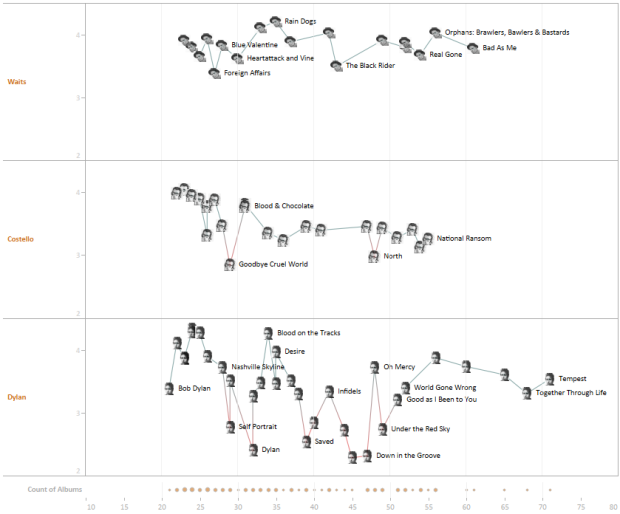 Do singer-songwriters age well like a fine wine, or does quality decline with age? Kyle Biehle analyzed fan ratings by age.

I understand all of the reasons for not comparing artists in this way. Despite twenty-one Academy Award nominations, Woody Allen never attends the Oscars. His reason is that art isn’t competition — judging art is so subjective who’s to say who or what is best? After all one man’s Poison is another man’s Cream. Similarly, Elvis Costello (featured in the viz) is famously credited with saying: “Writing about music is like dancing about architecture – It’s a really stupid thing to want to do.” I agree that using ratings – whether from fans or critics — to judge artistic merit is at best flawed and at worst a fool’s exercise.

But I wanted to do it anyway.

Most peak in their 20s and either stabilize later on or continue to decline. Occasionally, as in the case with Bob Dylan, there’s some see-sawing. Take a look at the Tableau interactive for a closer look. [via Waxy]