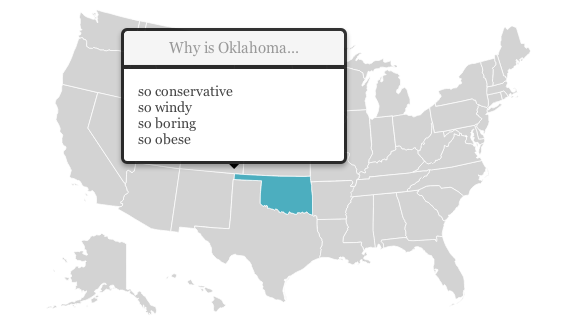 Renee DiResta got to wondering about state stereotypes, so she looked them up on Google and mapped them.

In the months before a US Presidential election, the quality of political discourse hits new lows. Blue State/Red State tropes dominate the news cycle as the media gins up outrage over perceived injustices in the culture wars. It’s all about our differences. So I started wondering, how do Americans really think about “those people” in other states? What are the most common stereotypes? For each of the fifty states and DC, I asked Google: “Why is [State] so ” and let it autocomplete. It seemed like an ideal question to get at popular assumptions, since “Why is [State] so X?” presupposes that X is true.

Roll over a state on the map, and the top four suggestions are listed. Hilarity ensues. “Why is California so… liberal, broke, anti-gun, and expensive?”