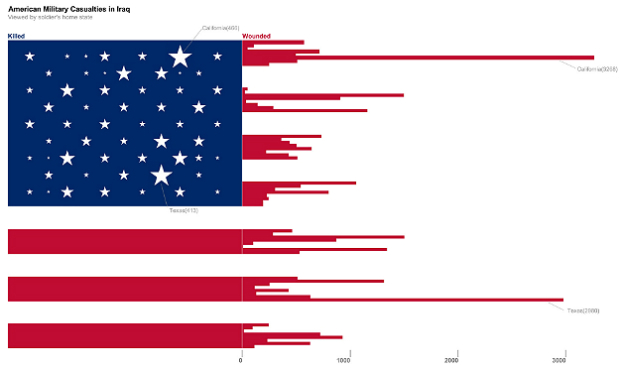 Yesterday I visited the ever popular NYU ITP bi-annual show which is a showcase of the students’ experimental and ingenious interactive work.

I stopped to talk to data visualization student and self-tracker, Doug Kanter, about his work. His first and smaller piece was about the war in Iraq. The image above depicts the number of wounded US soldiers by state (and territory) using the red stripes. The stars show the number of soldiers killed. I’m sure we could quibble about labels and where the bar chart starts, but to me, the tattered appearance of the flag created by data about war is very arresting.

Doug’s more developed work dealt with his self-tracked health data. He’s a type-1 diabetic and monitors his blood glucose, insulin dosage, and diet among other things. His visualization showed three months worth of data by which he says he was able to see how a low-carb diet helped keep his blood sugar in check. Doug’s blog post detailing his process and visualization is worth a read.

The ITP Spring Show runs through this evening at 721 Broadway in NYC. Over 100 projects are on display making this a must see of interactive innovation.